SCOTUS Has Lots Of Controversial Cases On The Docket This Term 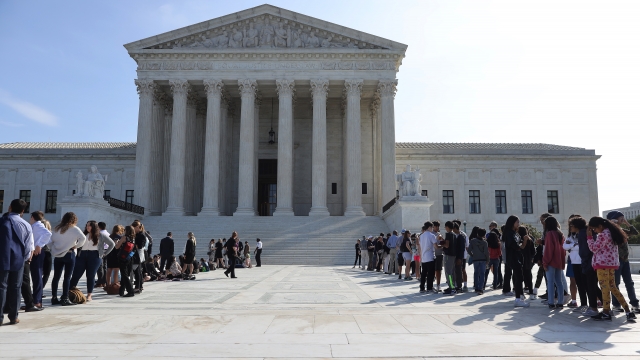 The high court kicked off its new term Monday with hearings on the "insanity defense" and the Sixth Amendment.

The Supreme Court returned on Monday to begin its next term. In the coming months, the nine justices will give the final say in controversial cases the nation seems divided on, involving topics like immigration, abortion, guns, LGBTQ rights, presidential power and the separation of church and state. And hearings may look a little different: A new rule will give lawyers two full minutes for their arguments before the justices can interject with comments or questions.

Next: immigration, and specifically DACA. DACA offers deportation protections for qualifying undocumented immigrants who came to the U.S. as children. It's meant to let them seek education and hold jobs without fear of deportation. The Trump administration has decided to phase out the program. But some say that's illegal under the Administrative Procedure Act, a law on how agencies establish regulations. Lower courts issued nationwide injunctions to allow the program to continue, and the Trump administration has asked the Supreme Court to step in.

Then: guns and the Second Amendment. A New York City law laid out where licensed handgun owners could take their firearms. It barred people from taking a handgun away from the address it was registered to, except to travel to an authorized shooting range or club within the city. The New York State Rifle & Pistol Association said that was too restrictive, and the Trump administration rallied for the law to be overturned. But after the high court agreed to review the case, the city amended the law to let people take their handguns to places such as second homes or shooting ranges outside city limits.The city has asked to take that case off the docket, but SCOTUS is hearing it anyway.

And later: abortion. A Louisiana law requires doctors who perform abortions to have admitting privileges at a hospital no more than 30 minutes away from abortion facilities. Louisiana says the law will set a standard for physician competence. But an abortion clinic and two physicians with The Center for Reproductive Rights say the law would leave "only one doctor to care for every woman seeking an abortion in the state."

On Monday, the justices heard a case on Kansas' death penalty and whether states can abolish the "insanity defense" for criminal defendants. It also heard a case involving the Sixth Amendment and whether it applies to state courts allowing juries to give non-unanimous criminal convictions.

SCOTUS will also hear cases this term on topics like aid given to religious schools, Obamacare and the Harvard admissions process. It could also rule on cases between President Trump and Congress involving disputes over possible impeachment proceedings and asserting immunity over investigations.