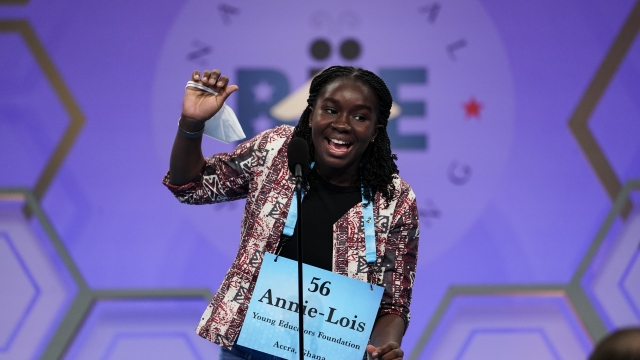 Everyone is excited to be back on the big stage. The spellers have spent months, and even years preparing for this moment.

After two years, the Bee is Back.

Spellers and their families have descended on National Harbor, Maryland for the 2022 Scripps National Spelling Bee.

For three days, 234 kids will compete on stage, spelling words that most adults can't even pronounce.

From the youngest speller, 7-year-old Matthew Yi from New Orleans, to the most experienced speller, 13-year-old Akash Vukoti, who's returned to compete in his 5th Bee.

"I have been very much longing for this day to come back and be at the Bee in person. It's such a great experience, and the magic of the Bee feels like it's back and better than ever," said Vukoti.

Everyone is excited to be back on the big stage. And the spellers have spent months and even years preparing for this moment.

"I like to study with my brother and we like to quiz each other," said 9-year-old speller Harini Jayakumar.

This year's spellers include three sets of siblings, making the competition a truly family affair.

On competing with his little sister, 13-year-old speller Rishi Jayakumar said: "[I'm] kind of nervous because I want to compete against her, but I don’t want to really beat her because she's my sister and I want to help her."

On competing against her brother, 11-year-old speller Shreeya Sivakumar said: "I mean, I don't feel like I have to beat him or anything. I just have a goal to make it past preliminaries, and I know his goal is a lot higher so maybe he's gonna beat me, probably."

But no matter what happens on stage this week, every speller who made it this far is already a champion.

Spelling continues all day Tuesday. Quarterfinals and semifinals are Wednesday. You can watch the finals live Thursday night, airing nationwide on Ion.