Seafarers Get A Shot At Getting The COVID-19 Vaccine 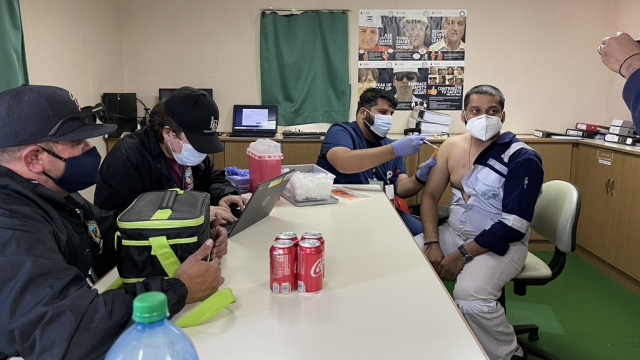 A ship inspector with the Seafarers International Union came up with the idea to give ship crews an opportunity to get the COVID vaccine.

At the Port of Los Angeles and Long Beach, where hundreds of ships are caught in holding patterns, a team of health workers navigate vast labyrinths. They make their way to crew members — seafarers, as they're called — who are unable to get to a clinic or pharmacy.

A U.S. flagship is headed to China by way of Hawaii, which requires vaccinations to go ashore.

It's the case around most of the globe: No vaccination, no leaving the ship. For many international seafarers, this outreach program offers them their first opportunity to get the shot.

Brittany Villarreal, who is a traveling nurse from South Texas, collects signatures of ship captains she meets.

She says some people are happy and grateful to get their vaccines.

"It's almost like Christmas for them," Villarreal said. "It's something they always wanted but could never receive easily, so they have to wait until the day comes. And they get so excited."

They're so excited because ports in the U.S., and almost everywhere else in the world, bar unvaccinated seafarers from leaving their vessels.

Stefan Mueller is a ship inspector with the Seafarers International Union. He says he came up with the vaccination idea and pitched it to the Long Beach Health Department. He's one of the few individuals allowed to board ships to see for himself their working conditions.

On a Japanese vessel, there was a minister who came by to try to meet with the crew and check on how the crew has been at sea. He tells Newsy of the woes of a Filipino crew.

"They signed on in June of 2020, if you think about that, that summer of last year. So they've gone through a whole Christmas, New Year's cycle, and they're now talking to me because they're concerned that we're coming up on another Christmas," Mueller said. "They were just pretty stressed and depressed and wondering how they're going to get home, and if they complain too much, they get sort of blacklisted."

Mueller hopes that crew members who've been vaccinated will at least be able to get off their ships for a few hours upon their return to L.A.

That's just beginning to happen. Pat Pettit is on her way to do something she hasn't done for the past 20 months — help give seafarers a break.

"These are the first guys I've had come ashore from a foreign ship. So I'm kind of excited about it," she said.

Pettit volunteers to pick up seafarers and take them wherever they want to go.

"I know how hard it has been, through the COVID and stuff," she said. "Can you imagine being on board with 19 to 22 guys, without even stepping on the ground?"

The men she met were coming off of a container ship named The Baltic North. It arrived from Shanghai.

The first two men, who work in their ship's engine room, were from the Philippines and had been on the ship for three and five months. Both were vaccinated the last time they were in L.A. They're also lucky.

"Customs and Border Protection is allowing some crews with visas and their COVID vaccines to go ashore," Mueller said. "Even if that's allowed, the management companies are not permitting them ashore. If any one of them still gets COVID, they're worried about it."

The men said they wanted to go to Walmart, but first Pettit took them to the Seafarer Center. There's a donation-supported center in many major ports around the world.

Dick McKenna is a retired U.S. Navy captain who volunteers his time at the International Seafarers Center of the City of Long Beach and Los Angeles. He also serves as its president.

"They're just thankful for a place like this to, you know, blow off some steam and relax a little," he said.

Through the pandemic, the facility has served, mainly, as quarters for U.S. seafarers waiting for their ships, caught in the backlog. Nowadays, McKenna said they're spending more time at sea

"They can't get off because of COVID while they're in port. They turn right around and they go right back and, you know, load up and come on back again," he said. "All we're hearing about is, 'Oh, all the ships at sea and all the trade and all the like, this and all that.' But there are sailors involved in this, and the sailors are bearing the brunt of that. Fortunately, with the vaccinations, that is starting to improve a little bit and we are starting to see some of the seafarers be able to come ashore."

The two Filipino seafarers got their first opportunity in many months to do some shopping for items that, perhaps, they themselves brought across the ocean. First, they stopped at the candy aisle. Then, one seafarer needed to find something for his girlfriend back home and hair clippers.

They say they hope to come back when they return to L.A. from Asia in around a month. But, in a few hours, they'll be back on the job, hidden from the world that so relies on them to make this possible.