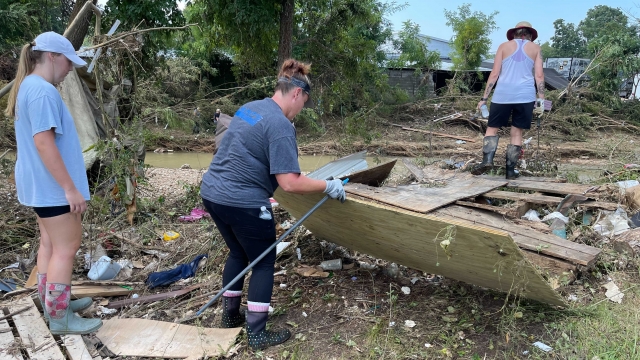 Locals searched a creek in Waverly, Tennessee for flood victims.

Crews with chainsaws and heavy equipment cleared their way through trees densely matted with vegetation, garbage and building debris Tuesday as searchers scoured a normally shallow creek for more flooding victims in rural Tennessee.Even cars and sheds were woven into the tangle of debris lining Trace Creek in Humphreys County, where the town of Waverly saw the most death and destruction from Saturday’s flooding that killed 18 people. Three people remained unaccounted for Tuesday.At one bridge, an excavator crawled into the creek to dig through a debris plug that included large trees, huge spools of cable, panels of wooden fencing and chunks of concrete. Officers watched from above and downstream in case a body was uncovered.Other crews were working with chainsaws along the banks, clearing smaller objects. Several miles downstream, officers had deployed drones to help with the search. It’s difficult to know how far the bodies might have been carried, but one car was found about a half-mile from where it had been parked, Humphreys County Chief Deputy Rob Edwards said.Sheriff’s deputies and police were aided by crews from agencies all over the state, he said. The teams have cadaver dogs at the ready if they suspect a body might be nearby. With the heat in the mid-80s and rising, it was not difficult to detect the odor of decay, Edwards said, although crews also were finding animals.As the search for the missing continues, officials have started to comprehend the scope of devastation in the community. Humphreys County Sheriff Chris Davis said hundreds of homes have been affected by the flooding and estimated about 125 were ruined.“Some are just gone — off the foundation — twisted, turned," Davis said at the news conference. "They would probably have to be totally destroyed before they could be built back.”“The sheer devastation that we saw in that helicopter ride yesterday has made me realize that we have got an extremely long road to go in all of this,” he said.Authorities revised the confirmed death toll to 18 people Tuesday, a drop from as high as 22. Waverly police Chief Grant Gillespie said that some people who were in the emergency room and died of natural causes were mistakenly added to the count. John and Jane Doe victims twice were not crossed off the list once they were identified, he said.Gillespie said authorities had detectives follow up on each case and confirm the numbers, which now line up with the state tally.“Just an honest mistake, and I hope everybody understands that,” Gillespie said. “It’s still a tremendous loss of life. I hope that number doesn’t grow.”Additional reporting from the Associated Press.

Residents and business owners who have flood related losses can begin applying for assistance by registering online at www.DisasterAssistance.gov or by calling 1-800-621-3362 or 1-800-462-7585 TTY.