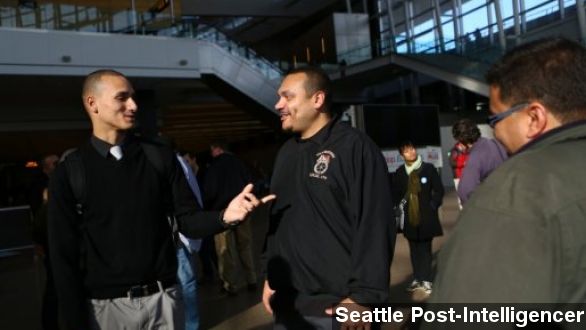 SeaTac barely passed a measure to increase its minimum wage to $15 per hour.

A small city of 27,000 just south of Seattle has passed the highest municipal minimum wage in the U.S.: $15 dollars an hour.

"That measure mandates that workers at the Seattle Tacoma International Airport, and nearby hotels, car rental agencies and parking lots receive a minimum hourly wage more than double the federal minimum wage of $7.25." (Via CNBC)

Workers at SeaTac International Airport were celebrating the ballot results, but the measure barely passed. It passed by 77 votes out of more than 6,000.

"A recount is being sought in SeaTac because of how close the election was." (Via MSNBC)

Oppenents of the measure are demanding that recount be done by hand.

But the vote is just a small sample of what could be coming. The nation's growth has been slow since the recession and wages have also stayed low.

The national minimum wage is $7.25 and some say it's not enough anymore.

Sen. Kirsten Gillibrand is one of many asking for higher minimum wages.

"Raising the minimum wage to $10.10 an hour would help 33 million Americans." (Via The Washington Examiner)

The new measure in Sea-Tac certainly sounds high, but it's actually not completely over the top. The New York Times points out...

Workers at Los Angeles International get a minimum of $15.37

San Francisco has a municipal minimum wage of $10.55

Wage rates of more than $11.00 have recently advanced in the Senate in both Washington D.C. and Massachusetts.

Along with the new SeaTac law workers will also not have to share tips and can now accrue up to 6 and half sick days per year.