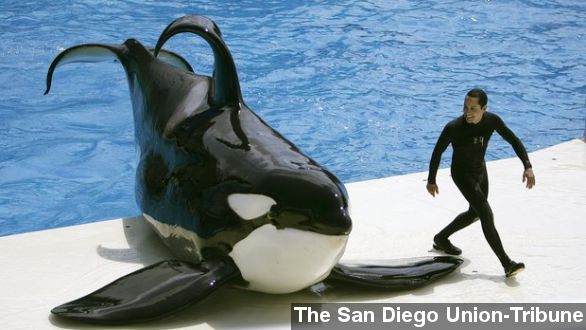 Seaworld is now appealing the federal judge’s ruling barring its trainers from getting in the water with killer whales.

Seaworld says shows like this are essential to its survival.

But critics say its only a matter of time before killer whales turn on their trainers. (Via NBC)

They point to an incident in 2010, when the park’s largest killer whale — a 12,000 pound orca named Tilikum — held veteran trainer Dawn Brancheau under water for a half hour and killed her. Tilikum was also linked to two earlier deaths. (Via CBS)

​​A year later federal safety regulators sued SeaWorld for violating workplace safety laws. A court then banned trainers from getting in the water with the whales. (Via YouTube / John Milton)

Seaworld is now appealing the federal judge’s ruling, on the grounds the decision is bad for business. A labor attorney not involved in the case, told CNN, the decades-old theme park has a strong case:

“They’re taking the position that this isn’t just the way we do work, it’s our product.” (Via CNN)

SeaWorld attorney Eugene Scalia, son of Supreme Court justice Antonin Scalia, argued the government has no more right to regulate SeaWorld than it does speed limits in NASCAR and tackling in the NFL. (Via ABC,  ESPN, Fox Sports)

As for the Labor Department, it argues trying to domesticate the ocean’s top predator “defiantly ignores reality" and puts the trainers at risk. (Via U.S. Court of Appeals)

But as some have pointed out, there’s a bigger issue at stake — the health and safety of the whales themselves, as documented in the recent documentary Blackfish.

“All whales in captivity are psychologically traumatized, it’s not just Tilikum.”

“If you were in a bathtub for 25 years, don’t you think you’d get a little psychotic.”  (Via Magnolia Pictures / "Blackfish")

Experts argue the stress of keeping killer whales in concrete tanks, separated from their families fosters aggressive behavior. They point out there’s no record of an orca harming a human in the wild. (Via National Geographic)

SeaWorld's appeal would affect all of its parks and attractions throughout the U.S. The court's ruling its not immediately expected.