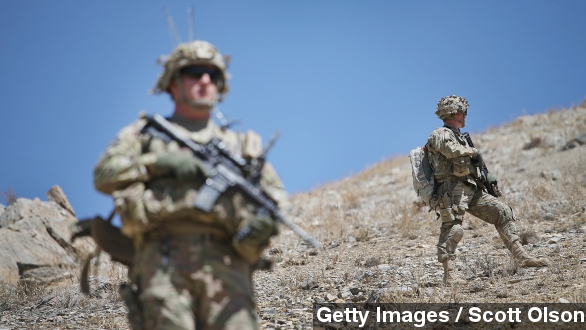 As NATO marks the end of its combat mission in Afghanistan, it has to keep the ceremony a secret for fear of a Taliban attack.

The NATO International Security Assistance Force marked the official end to its combat mission in Afghanistan with a ceremony on Sunday.

But the ceremony itself had to be organized in secret due to the threat of a Taliban attack, the number and intensity of which have increased in recent months. (Video via Al Jazeera)

The ceremony marked the end of the combat mission, but it's not the end of a foreign troop presence in Afghanistan. Some 12,500 troops will stick around on a new training mission.  (Video via U.S. Department of Defense)

And it was also nominally a handover ceremony, to Afghan security forces, who took over responsibility for the country's security more than a year ago in another ceremony. (Video via NATO)

The Taliban are already putting Afghan forces to the test — more than 4,000 Afghan soldiers died this year in Taliban attacks, more than any year since operations started in 2001. (Video via Press TV)

The U.S. will now switch from the combat mission of the last 13 years to lead a training mission, starting on New Year's Day.

As The Washington Post points out, the U.S. faces a "tight timeline," for the rest of its mission in Afghanistan in the next year, "closing the regional training sites, narrowing the effort to the capital, Kabul, and halving the number of U.S. troops on the ground."

About 9,800 U.S. troops remained in the country as of late September. President Obama announced in May he plans to withdraw all U.S. troops from the country by the end of 2016.