Rex Tillerson Is Out As Secretary Of State 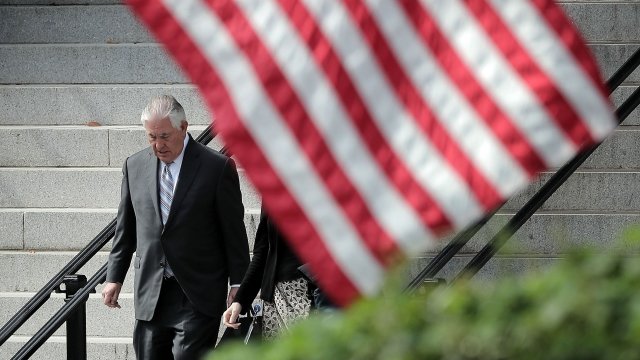 Rex Tillerson is out as secretary of state.

Tillerson will be replaced by current CIA Director Mike Pompeo, whose seat at the agency will be filled by Gina Haspel.

On Twitter, President Donald Trump thanked Tillerson for his service and noted Haspel will be the first woman to lead the CIA.

News of Tillerson's ouster started months ago. In November, a report from The New York Times detailed the plan to move Pompeo to the State Department. According to the paper, White House chief of staff John Kelly developed the plan and discussed it with other officials.

Tillerson's time as secretary of state was scrutinized, particularly because of his tumultuous relationship with President Trump. In October, sources told NBC News Tillerson considered leaving his post, and even reportedly went so far as to call Trump a "moron."

At the time, Tillerson denied NBC News' report and said: "I have never considered leaving this post."

His reported absence would fit a trend of being less focused on diplomacy and more concerned about efficiency.

Prior to Tillerson's exit, he and Trump differed on how to deal with the situations in Qatar, Saudi Arabia and North Korea. In each of those situations, Tillerson took noticeably less hard-line and more diplomatic actions.