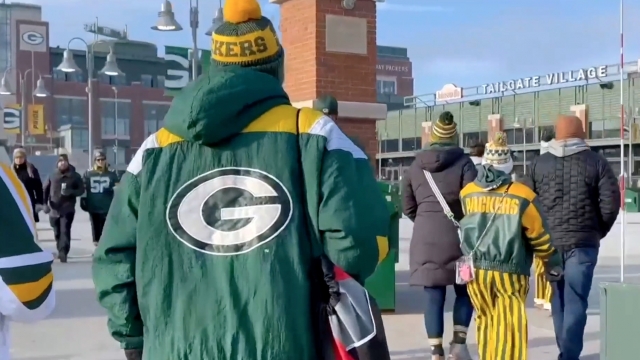 From the rowdy tailgates to the stadium concourse filled with drink stands and the vendors selling beer up and down the aisles — it's nearly impossible to avoid alcohol at NFL games. And that can make it difficult for sober fans to enjoy. But, a group called Section Yellow is trying to change that.

During every home game, Section Yellow sets up near Section 112 at Lambeau Field in Green Bay, Wisconsin. It's run by two volunteers per game, who are there to help anyone that might be struggling to stay sober while surrounded by fans drinking alcohol.

"I know the fear. I know the darkness that people are experiencing," Plageman said. "I don't want them to feel alone in doing this, because you don't have to be."

The effort has been personal for Plageman, a lifelong Packers fan who has been sober for thirteen years.

Sober fan groups for bands like Phish and the Grateful Dead served as inspiration for Section Yellow, which became a reality in 2019. And it's made a huge difference for fans in recovery from addiction ever since.

The International Wine and Spirits Record reported alcohol consumption in 10 key markets, including the U.S., fell 5%.

Denise Smerchek, who has been sober for sixteen years, volunteered at the Section Yellow table for the first time this season.

"Just talking to someone is enough to take away the urge or the thoughts of wanting to use," she said. "They give you balloons that get released at the beginning of fourth quarter, which is a pretty neat thing to see all the balloons floating around in the stadium. Just to know you're not alone is such a big part of recovery."

In Wisconsin, alcohol is the most commonly used addictive substance. And the rate of binge drinking stands out among the rest of the country.

That — mixed with the many highs and lows that come with watching your favorite team play — is why experts say groups like Section Yellow can help people safely enjoy hobbies they've had since before getting sober.

"Not being able to go to a game for fear of relapse in that situation is really, you know, like a hole in their existence," National Institute of Alcohol Abuse and Alcoholism Director George Koob said. "It's really beneficial for them to be able to go back and enjoy a sport that they love so much."

And it's not just Green Bay. In fact, thirteen teams — including four left in the playoffs — have established alcohol-free seating sections for fans.