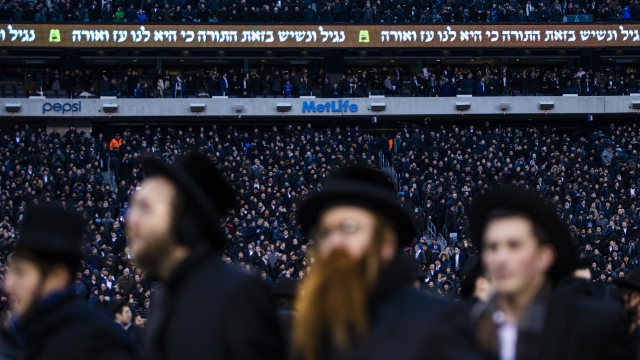 An organizer said he worked with over 50 law enforcement agencies in preparation.

Siyum HaShas celebrates the completion of a full reading of the Talmud — a 2,711 page holy book that guides Jewish life. It takes seven and a half years to read the whole thing.

Security presence was heavy following recent anti-Semitic attacks in the area. In December, six people were killed in a series of shootings in New Jersey that ended at a kosher grocery store. And less than a week before the Siyum HaShas event, five people were stabbed at a Hanukkah celebration in New York. The Anti-Defamation League says hate crimes against Jews have been on the rise since 2013.

Three hundred uniformed state police were in the stadium for Wednesday's event. An organizer told a local newspaper that he worked with over 50 law enforcement agencies in preparation.