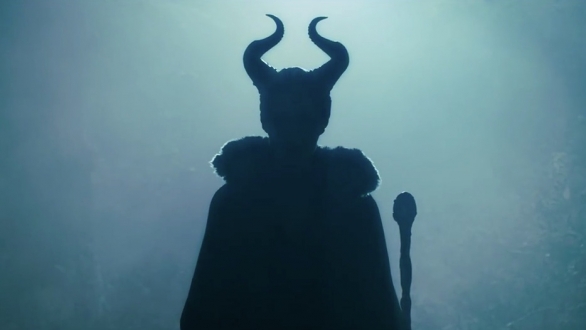 The first trailer has premiered for Disney's highly anticipated retelling of "Sleeping Beauty."

It's Angelina Jolie in all her glory. The trailer for "Maleficent" has premiered.

"Then you'll be afraid." (Via Walt Disney Pictures)

Yikes. Jolie is starring as the villain from the story of "Sleeping Beauty" in Disney's highly anticipated retelling of the tale.

The trailer hit the web just a day after the movie's first poster was released — and was dubbed "wickedly awesome," among other accolades. (Via CBS)

HitFix is impressed by the special effects, saying the trailer shows the movie will bring the classic animated world of "Sleeping Beauty" to life beautifully. (Via Hit Fix)

Cinema Blend says this glimpse confirms that Jolie is really all this remake/retelling needed to get off the ground — she's going to carry the movie and terrify along the way.

In August Jolie made a surprise appearance at Disney's fan event D23, and told fans that children on set were scared of her during filming. (Via USA Today)

The actress has said she's loved the villainous character since she was a child.

"So when I got the chance to play her I was very excited and very nervous." (Via IGN)

Really, "Maleficent" a bit of a throwback to Jolie's younger, darker days.

When she first hit the movie biz, the actress became known for roles in films like "Girl, Interrupted" — and infamously carried a vial of then-husband Billy Bob Thornton's blood around her neck. (Via Columbia Pictures)

"Maleficent" is due in theaters in May 2014, and will be followed by Disney's live-action version of "Cinderella" in 2015.