Sen. Chuck Schumer: 'We Are A Nation Suffocated By Firearms' 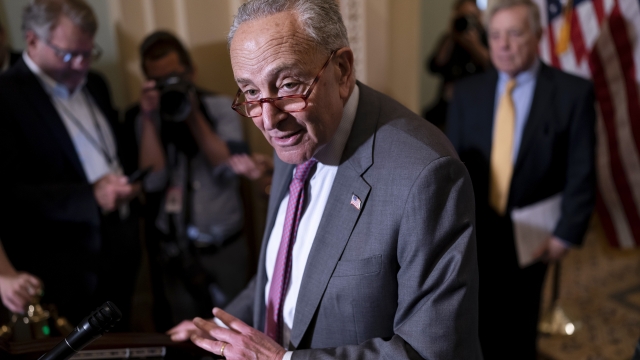 "If the slaughter of schoolchildren can't convince Republicans to buck the NRA, what can we do?" Schumer said.

Senate Majority Leader Chuck Schumer swiftly set in motion a pair of firearms background-check bills Wednesday in response to the school massacre in Texas. But the Democrat acknowledged Congress' unyielding rejection of previous legislation to curb the national epidemic of gun violence.

Schumer implored his Republican colleagues to cast aside the powerful gun lobby and reach across the aisle for even a modest compromise bill. But no votes are being scheduled.

"Please, please, please, damn it — put yourselves in the shoes of these parents just for once," Schumer said as he opened the Senate.

He threw up his hands at the idea of what might seem an inevitable outcome: "If the slaughter of schoolchildren can't convince Republicans to buck the NRA, what can we do?"

The killing of at least 19 children plus two teachers at an elementary school in Uvalde, Texas, has laid bare the political reality that the U.S. Congress has proven unwilling or unable to pass substantial federal legislation to curb gun violence in America.

Congress failed to approve a firearms background check bill after 20 kindergartners were shot and killed at Sandy Hook Elementary School almost a decade ago, and that signaled the beginning of the end of federal gun violence legislation.

Despite the outpouring of grief Wednesday after the starkly similar Texas massacre, it's not at all clear there will be any different outcome.

"We are accepting this as the new normal," said Sen. Chris Murphy, on "CBS Mornings." "It's our choice."

President Biden Says 'We Have To Act' After Texas School Shooting

President Biden directed that American flags be flown at half-staff through sunset Saturday in honor of the victims.

While President Joe Biden said "we have to act," substantial gun violence legislation has been blocked by Republicans, often with a handful of conservative Democrats.

Despite mounting mass shootings in communities nationwide — two in the past two weeks alone, including Tuesday in Texas and the racist killing of Black shoppers at a Buffalo, New York, market 10 days earlier — lawmakers have been unwilling to set aside their differences and buck the gun lobby to work out any compromise.

Even the targeting of their own failed to move Congress to act. In 2011, Former Rep. Gabrielle Giffords was shot in the head at a Saturday morning event outside a Tucson grocery store; and in 2017, several Republican lawmakers on a congressional baseball team were shot during morning practice.

"The conclusion is the same," said Sen. Cory Booker. "I'm not seeing any of my Republican colleagues come forward right now and say, 'Here's a plan to stop the carnage.' So this is just normal now, which is ridiculous."

Pleading with his colleagues for a compromise, Murphy said he was reaching out to the two Texas Republican senators, John Cornyn and Ted Cruz, and had called fellow Democratic Sen. Joe Manchin, who authored the bill that failed after Sandy Hook.

"Every moment is just horrific, but when you have babies, little children, innocent as can be, oh God," Manchin told reporters late Tuesday as news broke of the Texas shooting, noting he had three school-age grandchildren.

"It just makes no sense at all why we can't do common sense — common sense things — and try to prevent some of this from happening."

In the aftermath of Sandy Hook, compromise legislation, written by Manchin of West Virginia and Republican Sen. Pat Toomey of Pennsylvania, was backed by a majority of senators. But it fell to a filibuster — blocked by most Republicans and a handful of Democrats, unable to to overcome the 60-vote threshold needed to advance.

The same bill flamed out again in 2016, after a mass shooting at a nightclub in Orlando, Florida.

Congress has been unable to pass substantial gun violence legislation since the collapse of a bipartisan Senate effort in the aftermath of Newtown.

A modest effort to strengthen the federal background check system for gun purchases did make it into law after the 2018 Parkland school shooting in Florida. The "Fix NICS" measure, which provided money for states to comply with the existing National Instant Criminal Background Check system and penalize federal agencies that don't, stalled on its own before being tucked into a broader bill needed to keep the government running.

Former President Donald Trump vowed action in 2019, after back-to-back mass shootings rocked the nation when a gunman opened fire at a shopping center in El Paso and another targeted a popular nightlife spot in Ohio, killing dozens. In 2018 his administration had banned bump stocks, the attachments that allow semi-automatic weapons to fire like machine guns and were used during the October 2017 shooting massacre in Las Vegas.

But Trump eventually backed away from the proposals, pressured both times by the National Rifle Association and other groups.

President Biden, whose party has slim control of Congress, has failed to push gun violence bills past what is now primarily Republican opposition in the Senate.

Last year, the House passed two bills to expand background checks on firearms purchases. One would have closed a loophole for private and online sales. The other would have extended the background check review period, a response to the church shooting of Black people by a White man in South Carolina.

Both languished in the 50-50 Senate where Democrats have a narrow majority because of Vice President Kamala Harris' ability to cast a tie-breaking vote but need at least 10 Republicans to overcome a filibuster.

The stalemate has renewed calls to do away with the Senate filibuster rules for legislation, as the Senate has already done for nominations, lowering the threshold to a 51-vote majority for passage.

"Why do you go through all the hassle of getting this job, of putting yourself in a position of authority if your answer is that as the slaughter increases, as our kids run for their lives, we do nothing?" Murphy said in a fiery speech late Tuesday as news spread of the Texas massacre.

Cornyn told reporters he was on his way to Texas and would talk with them later. Cruz issued a statement calling it "a dark day. We're all completely sickened and heartbroken."