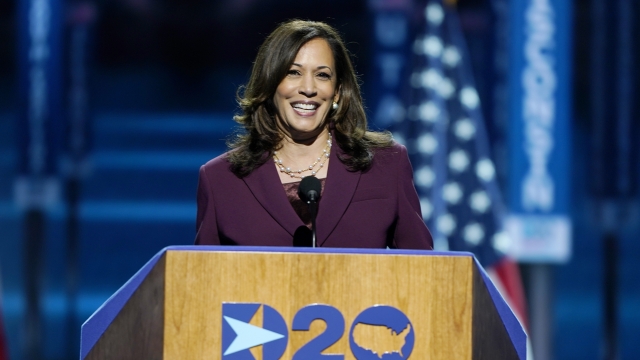 "I accept your nomination for vice president of the United States of America," Sen. Kamala Harris said.

The California Democrat, who joined the Joe Biden ticket one week ago, delivered her acceptance speech to a mostly empty arena in Wilmington, Delaware.

"I pledge to you that we will act boldly and deal with our challenges honestly. We will speak truths, and we will act with the same faith in you that we ask you to place in us," Harris said.

The first woman of color ever to join a major party presidential ticket rounded out a long list of female leaders speaking on the third evening of the convention -- including Sen. Elizabeth Warren, House Speaker Nancy Pelosi and 2016 Democratic presidential nominee Hillary Clinton.

"Remember back in 2016 when Trump asked, 'What do you have to lose?' Well, now we know," Hillary Clinton said.

Clinton and former President Barack Obama urged voters to make sure they show up to the polls this time around, nearly four years after lower turnout in key states cost Democrats the White House. Obama offered arguably the strongest rebuke of his successor yet.

"For close to four years now, he has shown no interest in putting in the work. No interest in finding common ground. No interest in using the awesome power of his office to help anyone but himself and his friends," the former president said.

Night three focused heavily on women's issues and lent airtime to issues like immigration, gun control and climate change. The Biden campaign continues to walk a fine line between opening up the party's "tent" of support at the risk of alienating those on the left. Moderate and even GOP voices were prominent in the first two nights, while Sen. Bernie Sanders and a short speech from Congresswoman Alexandria Ocasio-Cortez served as essentially the only progressive voices.

But former opponent Sen. Warren hearkened back to her own campaign phrase and told voters Joe Biden has a plan to make their lives better. The president, she said, does not.

"Donald Trump's ignorance and incompetence have always been a danger to our country. COVID-19 was Trump's biggest test. He failed miserably," Sen. Warren said.