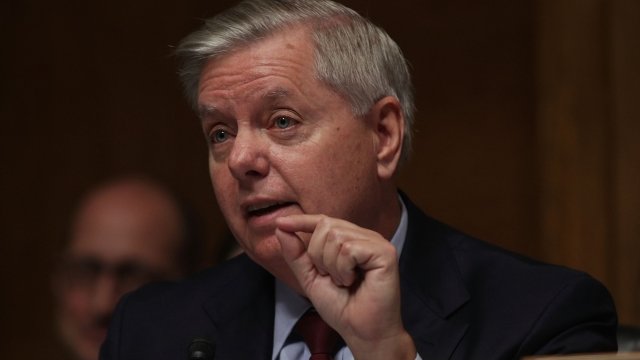 Sen. Lindsey Graham said he thinks there's a 3 in 10 chance the Trump administration goes for a military option with North Korea.

The chance of U.S. President Donald Trump attacking North Korea isn't totally out of the question, at least according to Sen. Lindsey Graham.

Graham said the topic of North Korea comes up "all the time" when he is with the president. The Atlantic reports Graham thinks there's a 3 in 10 chance Trump goes for a military option to stop the Hermit Kingdom from acquiring the capability to target the U.S. mainland with a nuclear weapon.

If the North tests another nuclear bomb, those odds jump to 7 in 10 — according to the senator.

Graham hasn't exactly shied away from supporting military solutions for North Korea in the past — something other lawmakers have warned against.

But Graham did say he's willing to try just about anything to avoid all-out war.

Still, Graham warned that we're reaching a tipping point and that if Kim Jong-un tests another nuke, "all bets are off."

The White House has said it wants to resolve the "very dangerous situation in North Korea" but hasn't indicated what that response could look like.