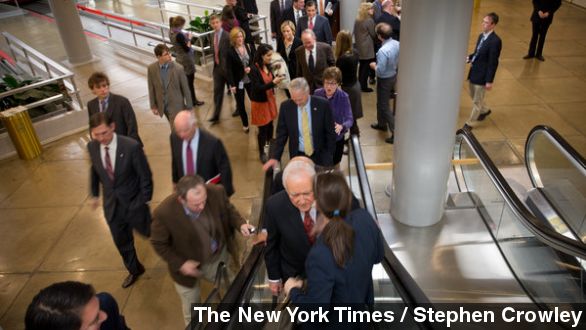 By a vote of 67-33, the Senate advanced the two-year bipartisan budget deal. Fifty-one votes are needed for final passage.

It was only a procedural vote, but a promising sign that Congress might actually get something done this year.

By a Senate vote of 67-33, a two year bipartisan budget deal — designed to avoid another government shutdown — cleared its last big hurdle. (Via MSNBC)

It needed 60 votes to overcome the threat of a filibuster — 12 of which came from Senate Republicans who broke rank to join all the Democrats in the chamber. (Via Euronews)

This means final approval in the Senate is pretty likely, since that only requires a simple majority of 51 votes.

​As for what’s in the deal, in two years time it would restore $63 billion in across-the-board cuts to defense and domestic programs known as sequestration. (Via Wikimedia Commons / ingfbruno)

One thing the bill does not extend: long-term unemployment benefits to the 1.3 million people set to lose them at the end of the month — despite lobbying from the White House. (Via ABC)

The deal sailed through the GOP-controlled House last week — though not without criticism from some conservative think tanks which took issue with the bill’s sequester relief. (Via CBS)

Putting them at odds with Republican House Speaker John Boehner.

“Are you kidding me?” (Via Politico)

And in the Senate, The Wall Street Journal notes, a handful of senators facing re-election against Tea Party challengers faced pressure to vote no.

But even those who did support the legislation, conceded it was far from ideal. And that includes the bill’s main architects, who said it was a necessary, if somewhat imperfect, step in the right direction.

PATTY MURRAY: “We didn’t get everything we wanted, but I'll tell you what we did get is certainty for the next two years.” (Via NBC)

PAUL RYAN: “I’m not trying to over-sell this as an enormous budget accomplishment  … It’s not. But it’s important that it prevents government shutdowns.” (Via Fox News)

President Obama has said he’ll sign the budget legislation if it reaches his desk.