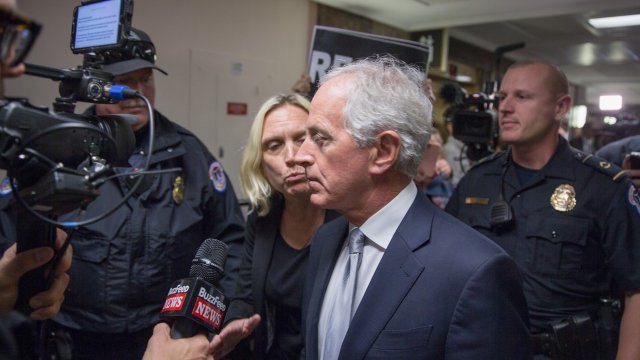 If all goes according to plan, it could be on the Senate floor by the end of this week.

The GOP tax bill has passed the Senate Budget Committee. It's a big step in the right direction for the measure, but there's still a ways to go.

The committee took a brief recess due to the dozens of protesters near the hearing room, but eventually passed the bill on a party-line vote 12-11.

If all goes well for the Republicans, a full Senate vote for the $1.5 trillion tax plan could happen by the end of this week.

And the majority of those states are led by Democrats.

The decision came after President Donald Trump met with Republicans to discuss potential changes to the bill. Former holdouts like Sens. Bob Corker, Susan Collins and Ron Johnson said they would come around if their demands were met.

But that's easier said than done. One idea being pushed to appease Corker and other deficit hawks is a "trigger" to roll back tax cuts if they end up adding too much to the deficit.

That could be a poison pill for other conservatives. Republican Sen. John Kennedy said he'd keep an open mind, but, "Right now, my feeling about it is that I'd rather drink weedkiller than vote for the thing."

If the bill passes the Senate, it will also still need to be reconciled with the House's Tax Cuts and Jobs Act, which was passed earlier this month, before it heads to Trump's desk.