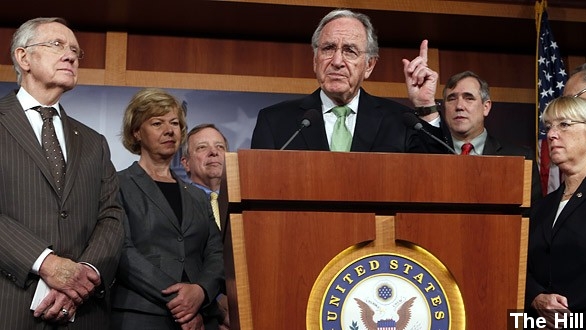 A bill banning workplace discrimination based on gender identity and sexual orientation passed in the Senate Thursday.

A historic bill banning workplace discrimination based on sexual orientation or gender identity passed in the Senate Thursday with bipartisan support.

The Employment Non-Discrimination Act, or ENDA, passed 64 to 32 in the Senate Thursday, after 10 Republicans joined the Democratic majority to overcome a filibuster on the bill. (Via WJLA)

But despite its success in the Senate, ENDA faces a grim future in the House, where House Speaker John Boehner has already vowed to deny the bill a vote. Monday a spokesperson for Boehner said ENDA "will increase frivolous litigation and cost American jobs, especially small-business jobs." (Via Politico)

Before the bill's passage, Senate Democrats put pressure on House Republicans to pass ENDA. Sen. Chuck Schumer accused Boehner of legislative obstruction, pointing to several other Senate bipartisan bills that have died in the House.

"Nearly every time the Senate passes a bill, it’s like we’re banishing the issue to a faraway jail. And Speaker Boehner's the prison warden." (Via C-SPAN)

ENDA gained the key Republican support needed for its passage thanks to a clause exempting religious organizations from the law — a compromise The New York Times calls "a stamp of legitimacy to the very sort of discrimination the act is meant to end."

The religious exemption clause has come under fire from both sides of the gay rights debate. Republican Sen. Dan Coats called ENDA's religious protections "vaguely defined" and warned the bill could violate the religious freedoms of for-profit businesses. (Via Talking Points Memo)

And a writer for The Huffington Post says gay rights activists should be pushing to strip the religious exemption clause out of ENDA entirely.

"That may make it harder to get it passed, and it may take a lot longer, but so be it. There are no shortcuts or bargains on civil rights. … We need to stop viewing the ENDA vote this week as a sign of how far we've come … and instead view it as a sign of how much further we need to go."

ENDA's passage is the latest legislative push to advance gay rights since Congress repealed the military's ban on openly gay and lesbian members in 2010.