Senate Passes 'I Am Vanessa Guillén Act' As Part Of NDAA 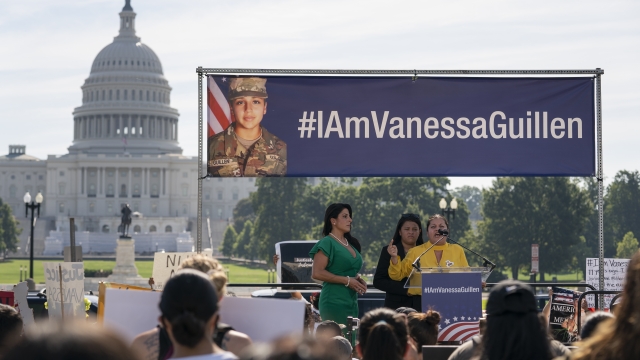 Since Guillen's death, her sister Mayra and family attorney Natalie Khawam have traveled across the U.S. raising awareness and calling for change.

Today, the "I Am Vanessa Guillén Act" is on its way to becoming law after the Senate passed the National Defense Authorization Act.

This comes nearly two years after the family of a murdered Fort Hood soldier, Army Specialist Vanessa Guillén, began pushing for new legislation to help service members who have been sexually harassed or assaulted while serving in the armed forces.

Since Guillén's death in April of 2020, her sister Mayra and family attorney Natalie Khawam have traveled across the country raising awareness about how rampant sexual assaults are in the military and what needs to change.

"The whole thing doesn't feel real to me ever since my sister passed away," Mayra said. "But I'm proud of the work that we've done. And I'm very thankful that our voices are being heard and my sisters being honored in the best way possible."

Previously, the military investigated and prosecuted sexual assault and harassment allegations. But under the new act, cases will be investigated by professionals outside the chain of command, sexual harassment will be an offense under the uniform code of military justice and there will be a new office of the chief prosecutor for each branch.

These sweeping changes come after Guillén reported she was being sexually harassed.

According to the Guillén, chains of command failed to respond to her reports. It was not until she tragically died at the hands of another soldier that military and civilian law enforcement began investigating her claims.

"It's sad to say that my sister had to go through such things to see this change, but, you know, we couldn't just let her death be in vain and that's why we're here today," Mayra said.

Many believe the changes will help lessen the fear of retaliation and encourage others to come forward.

"I know that she's very proud to see that we're doing this," Mayra continued. "Not only in her honor, but to possibly save more lives so other victims won't have to go through what she went through. And if this was her purpose, and like, I'm sure she's glad to see him fulfilled. So no, she's proud.”

Mayra says they still have a lot of work to do, including pushing for an amendment that will allow active duty members who have been sexually assaulted and their families to file claims against the government.