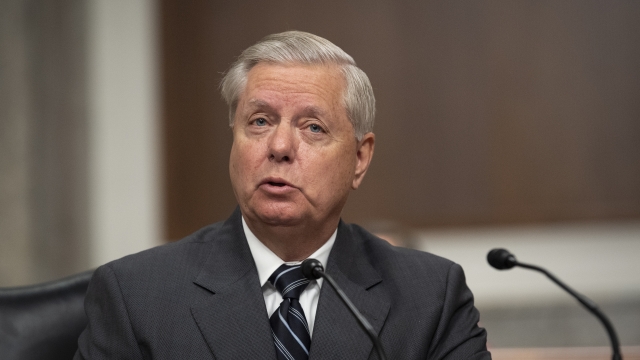 Social media's attempt to stop false information around a New York Post story on Joe Biden and his son has left them open to censorship allegations.

Social media giants Twitter and Facebook are in Republican crosshairs once again. This time, it’s over a controversial story about Joe Biden’s son published in the New York Post.

"I've been asked by my Democratic colleagues to hold it over, and I think there’s a lot of interest on the other side of getting some of the social media folks here to answer questions about their platforms," said Sen. Lindsey Graham, chair of the Senate Judiciary Committee.

The content of that New York Post story about the younger Biden’s business relationships in the Ukraine has been a talking point for many — but so has social media’s attempt to moderate the article which many say is questionably sourced.

And that has opened these platforms to new allegations of censorship by Republicans.

Facebook decided to reduce the reach of the link to the Post story and said it was eligible to be fact-checked by its partners. Twitter went further and blocked users from sharing the link entirely, citing its policy banning the distribution of information obtained through hacking.

Republicans quickly put pressure on the platforms. In a letter to Dorsey, Sen. Josh Hawley said “I find this behavior stunning but not surprising from a platform that has censored the President of the United States.” Twitter later reversed their decision and allowed users to share the link.

"Content moderation didn't work here, even if if you look at it as the only go goal is to stop the spread," said Bret Schafer, Media and Digital Disinformation Fellow at the Alliance for Securing Democracy. "It didn't do that. And then I would say it backfired tremendously because you took a story that likely would have only resonated with some of the president's core supporters. And you blew it up into an issue about censorship."

Schafer told Newsy that social media companies “didn’t have any good options” to deal with the Post story that didn’t risk the spread of more false information.

According to Zignal Labs, social media shares of the New York Post article nearly doubled after Twitter blocked the story. It was shared at least 968,000 times.

"If they don't do anything, they've been created the information systems that allow political opponents to be smeared, to be harassed, to be targeted," Schafer said. "And if they do do something, then the story becomes: "Well, it's censorship. It's political bias.""

On October 28, Zuckerberg and Dorsey, along with Google CEO Sundar Pichai, are set to testify before the Senate Commerce Committee about Section 230 of the Communications Decency Act, which grants liability protections to internet platforms for how they choose to moderate content.