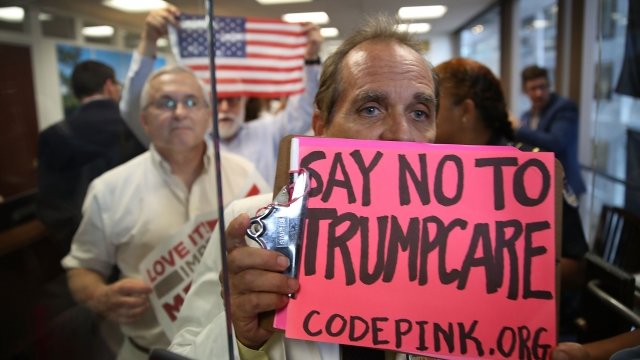 Senate Republicans are changing course. They're now hoping to repeal Obamacare without having a replacement lined up.

The bill needed at least 50 votes to pass, but a lack of support from Sens. Susan Collins, Rand Paul, Mike Lee and Jerry Moran effectively killed it.

Collins opposes the bill because of its cuts to Medicaid. Lee, Moran and Paul won't support it because they say it doesn't fully get rid of the Affordable Care Act.

The estimate from the Committee for a Responsible Federal Budget includes the repeal's effect on the economy.

The Senate tried a clean repeal of the Affordable Care Act in 2015. Then-President Barack Obama vetoed it.

President Donald Trump tweeted his support for a repeal, saying Republicans should work on a new plan starting "from a clean slate."

McConnell said the repeal-only effort would include a two-year delay to ease the transition. He plans to amend the House's health care bill and hopes to hold a vote in the coming days.