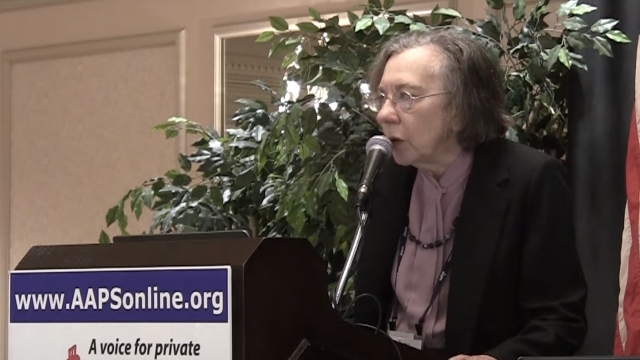 Dr. Jane Orient is dismissing criticism from dozens of other doctors about her participation in a coronavirus hearing in the U.S. Senate where she repeatedly endorsed the use of hydroxychloroquine.

“It is apparently a closed-minded group,” Orient said in an interview with Newsy.

At the hearing she told senators hydroxychloroquine may actually help the heart, disputing the FDA’s findings that the drug can dangerously disrupt cardiac rhythm.

The FDA has not approved hydroxychloroquine as a drug to treat the virus.

Orient also said vaccines have not been shown to prevent spread of coronavirus, though they’ve yet to be deployed in the U.S.

Dozens of doctors and scientists released a statement led by Dr. Ashish Jha, dean at the School of Public Health at Brown University, warning senators against giving a voice to people who push unproven treatments or ignore science and data.

Along with her views about hydroxychloroquine, Orient still questions whether vaccines cause autism.

Giving Orient a platform to speak was a potentially dangerous decision, said Dr. Paul Offit, director at the Vaccine Education Center at Children’s Hospital of Philadelphia.

“It’s like having a meeting to discuss the solar system and having somebody who represents the point of view that the sun revolves around the earth,” Offit said. “It doesn’t add anything. All it does is take up time and confuse people.”

Orient is executive director of the Association of American Physicians and Surgeons.

IRS records show it’s a big name for a relatively small group of 3,000 members and a budget under $1 million.

The group opposes “mandated vaccines,” considering them a “serious intrusion into individual liberty.”

Orient was invited to testify by Sen. Ron Johnson, a Republican from Wisconsin and fellow booster of hydroxychloroquine.

“Why not give it a shot?” Johnson said at the hearing. “Why is there such a concerted effort to silence the voices of courageous health professionals promoting early treatment? It makes no sense.”

It was the second panel he held featuring doctors with views about the coronavirus disputed by science.

Orient said her goal is to save lives, not deny treatment.