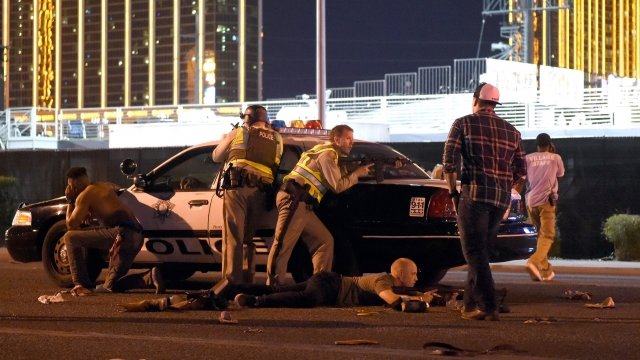 A gunman opened fire on the Route 91 Harvest music festival in Las Vegas Sunday night, killing at least 58 people and injuring more than 500.

Many on social media sent thoughts and prayers to the Las Vegas community Monday, the day after a gunman opened fire on a music festival, killing at least 58 people.

But among those condolences, some lawmakers asked their colleagues to take action on gun legislation.

Sen. Chris Murphy of Connecticut said in a statement, "It is positively infuriating that my colleagues in Congress are so afraid of the gun industry that they pretend there aren't public policy responses to this epidemic."

Now is not a moment for silence; it's a time for action.

In a Facebook post, Sen. Richard Blumenthal, also of Connecticut, noted it's been just over a year since the shooting at Pulse nightclub in Orlando. He wrote, "In the interim, thousands more have been lost to the daily, ruthless toll of gun violence. Still, Congress refuses to act. I am more than frustrated, I am furious."

In this tragic moment, I encourage all Americans to stand together in solidarity to support the Las Vegas community and all those effected. pic.twitter.com/HMXEsm3w59

The Dru Project: A Glimmer Of Hope After The Pulse Nightclub Shooting

The Dru Project is a nonprofit that will offer scholarships and curriculum to implement gay-straight alliances in schools.

"In moments of tragedy and horror, America comes together as one, and it always has," Trump said.

Trump said he plans to visit Las Vegas on Wednesday.