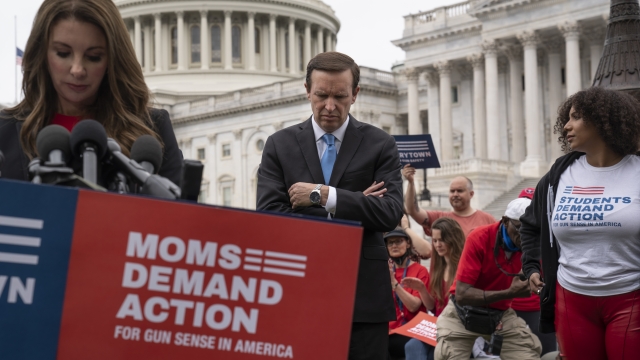 Led by Democratic Sen. Chris Murphy, the group of 10 is hoping to negotiate a proposal over the Senate's upcoming recess and have it ready by June.

A bipartisan group of senators is considering how Congress should respond to the horrific shooting of 19 children and two teachers in Uvalde, Texas, restarting gun control talks that have broken down many times before.

Aware of the difficulty of their task, the Democrats and Republicans say they hope to find agreement on legislation that could help reduce the number of mass shootings in the United States. The Uvalde shooting came 10 days after a gunman opened fire in a racist attack killing Black people at a Buffalo, New York, supermarket.

Texas is in the spotlight this week as the national discussion around guns and mass shootings has reignited.

Senators have narrowed the discussion to a few ideas, some of them based on legislation they have been working on for years, such as expanded background checks or red flag laws that keep guns away from people who could do harm. Led by Democratic Sen. Chris Murphy of Connecticut, the group of 10 is hoping to negotiate a proposal over the Senate’s upcoming recess and have it ready for a vote at the beginning of June.

It is uncertain if the group can come to consensus, and even if they do, winning enough votes from Republicans could prove difficult, as most do not want to see changes in the nation’s gun laws. Democrats would need 10 Republican votes to overcome a filibuster and get a bill through the 50-50 Senate.

“Odds are against us, but we owe it to parents and kids to try,” tweeted Murphy, who has been a lead advocate for stricter gun control since 20 children and six educators were killed at Sandy Hook Elementary School in Newtown, Connecticut, in 2012.

Here's a look at the proposals under consideration, and others that are not:

Senators emerging from a bipartisan meeting Thursday were talking about the possibility of incentivizing states to pass red flag laws that take firearms away from people who may do harm to themselves or others.

Many states have adopted red flag laws, including Florida, which passed a law after the Parkland high school shooting in 2018, and Maine, which has a “yellow flag” law that requires a medical professional to sign off before guns were removed. Sen. Susan Collins of Maine, a moderate Republican, has pushed for something similar on the federal level.

Republicans are unlikely to get on board with a red flag statute for the entire country. Sen. Lindsey Graham of South Carolina, a Republican who is also part of the group, said after the meeting that would be a non-starter, “whatever the color.”

As an alternative, they are discussing whether federal grants could coax states into implementing such flag laws, an idea explored in past years by Democratic Sen. Richard Blumenthal of Connecticut and Republican Sen. Marco Rubio of Florida. Blumenthal, who is working with Graham on the compromise proposal, said the "complicated and challenging part” will be figuring out what the standards are for removing guns from a person who is flagged.

Still, Blumenthal said “there is a powerful emotional element to the red flag statute that gives it momentum, especially after Uvalde and Buffalo, where the shooter indicated very strong signs that he was dangerous.” The shooter in New York had been reported by his school, but the state’s red flag law was not triggered.

The House is planning to pass its own version of red flag legislation when it returns from a two-week recess June 6.

Democratic Sen. Joe Manchin of West Virginia and Republican Sen. Pat Toomey of Pennsylvania have been trying for almost a decade to pass expanded background checks for all commercial gun sales, including at gun shows and on the internet. Under current law, background checks are required only when guns are purchased from federally licensed dealers.

The idea has wide public support, even among many gun owners, but the two senators have faced resistance from congressional Republicans who don’t want any changes, along with groups like the National Rifle Association. Various versions of the proposal have been repeatedly defeated in the Senate, including in 2013 after the Newtown massacre and in 2016 after a shooting in which 49 people were killed at an Orlando, Florida, nightclub.

The House passed legislation last year that would expand background checks to almost all sales, including private sales. The senators have been in talks since then about crafting a version that could pass their chamber, but they have yet to come to agreement. Manchin says the House version goes too far and could interfere with informal sales between people who know each other.

Republicans who have traditionally opposed gun control have seized on the idea of “hardening” schools, giving money for more resources, law enforcement officers or even arming teachers.

Republican Sen. Mike Rounds of South Dakota suggested this week that Congress “promote direct funding for local units, to be able to have the resources available to add additional protections to offer a deterrence for these individuals.”

Murphy said Thursday that he is “open” on adding funds for school security and that the working group is looking at what could be done along those lines. But Democrats have adamantly opposed arming teachers, and they say money for security is not enough.

A second bill passed by the House last year would extend the review period for background checks from three to 10 days. Democratic Rep. Jim Clyburn of South Carolina introduced the legislation after a shooter killed nine people at a historic Black Charleston, South Carolina, church in 2015.

Senate Majority Leader Chuck Schumer started the process of bringing that bill to the Senate floor this week, but it does not appear to be a part of the Senate negotiations.

The FBI said after the Charleston shooting that a background check examiner never saw the shooter’s previous arrest report because the wrong arresting agency was listed in state criminal history records, and the gun dealer was legally permitted to complete the transaction after three days. Clyburn and other supporters of the legislation say it would fix that problem.

Republicans have overwhelmingly opposed the legislation, saying it could delay purchases for lawful gun owners.

An assault weapons ban passed in the 1990s expired 10 years later, and Democrats have not been able to muster the votes to pass another one. The Senate rejected a renewed ban in 2013, along with the Manchin-Toomey proposal, after the Newtown shooting. Senators also rejected a ban on high-capacity magazines that year.

President Biden last year proposed a ban on assault weapons and many Democrats believe that would be one of the most effective ways to curb mass shootings, since they almost always involve those types of weapons. But a ban has almost no support among Republicans and has not been a part of the discussions so far.

Murphy, who gave an impassioned speech on the Senate floor Tuesday as the news broke of the Texas shooting, has said he wants to start with proposals that are doable.

“There is a common denominator we can find,” Murphy said. “There is a place where we can achieve agreement.”