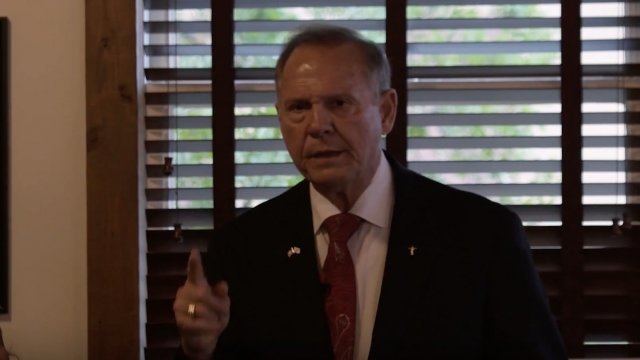 Moore has made it clear — he wants to make life difficult for the Senate majority leader.

Senate Majority Leader Mitch McConnell has had a hard year, getting almost nothing done in his chamber despite having a majority. And depending on how the Alabama Senate runoff goes, it might get even tougher.

Politico spoke with more than a dozen GOP senators who say they're convinced Moore as a senator would add more cracks to the already thin ice the GOP is on.

Moore is a former Alabama judge who was removed from the bench twice: once for refusing to remove a statue of the Ten Commandments from Alabama's Supreme Court building, and another time for ignoring the U.S. Supreme Court decision recognizing gay marriage. Both actions have endeared him to religious conservatives.

And Moore has signaled a win for him would be bad for the majority leader and said it would mean "the end of Mitch McConnell's reign." Some establishment Republicans say they're also worried Moore would embolden other conservative challengers in primaries, putting McConnell's hold on his caucus in even more peril.

The runoff will be Sept. 26. The special election to fill Jeff Sessions' Senate seat will be Dec. 12.

McConnell and his allies have been fighting to make sure that won't happen. A pro-McConnell PAC spent millions of dollars on ads for Sen. Strange in Alabama, and he has the backing of the vast majority of his colleagues in the Senate.

Even President Donald Trump, who's had spats with McConnell, is on board to make sure Strange keeps his seat. The president has endorsed the incumbent on Twitter and will hit the campaign trail with Strange before runoff voting starts.