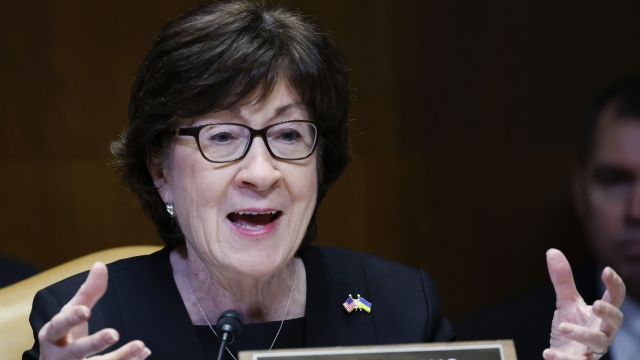 A bipartisan group of senators agreed Wednesday on proposed changes to the Electoral Count Act, the post-Civil War-era law for certifying presidential elections that came under intense scrutiny after the Jan. 6 attack on the Capitol and Donald Trump's effort to overturn the 2020 election.

Long in the making, the package introduced by the group led by Sens. Susan Collins of Maine and Joe Manchin of West Virginia is made up of two separate proposals. One would clarify the way states submit electors and the vice president tallies the votes in Congress. The other would bolster security for state and local election officials who have faced violence and harassment.

"From the beginning, our bipartisan group has shared a vision of drafting legislation to fix the flaws of the archaic and ambiguous Electoral Count Act of 1887," Collins, Manchin and the other 14 senators said in a joint statement.

"We have developed legislation that establishes clear guidelines for our system of certifying and counting electoral votes," the group wrote. "We urge our colleagues in both parties to support these simple, commonsense reforms."

Capitol Rioter Explains Why He Participated At Jan. 6 Hearing

Stephen Ayres said he and other rioters believed former president Donald Trump would join them as they marched to the U.S. Capitol.

Votes are not likely before fall. But with broad support from the group of 16 senators, seven Democrats and nine Republicans, who have worked behind closed doors for months with the help of outside experts, serious consideration is assured.

In a statement, Matthew Weil, executive director of the Democracy Program at the Bipartisan Policy Center, called the framework a "critical step" in shoring up ambiguities in the Electoral Count Act.

After Trump lost the 2020 election, the defeated president orchestrated an unprecedented attempt to challenge the electors sent from battleground states to the joint session of Congress on Jan. 6, when the vice president presides over certification.

Under the proposed changes, the law would be updated to ensure the governor from each state is initially responsible for submitting electors, as a way to safeguard against states sending alternative or fake elector slates.

Additionally, the law would spell out that the vice president presides over the joint session in a "solely ministerial" capacity, according to a summary page. It says the vice president "does not have any power to solely determine, accept, reject, or otherwise adjudicate disputes over electors."

That provision is a direct reaction to Trump's relentless efforts to pressure then Vice President Mike Pence to reject the electors being sent from certain battleground states as a way to halt the certification or tip it away from Joe Biden's victory.

The bill also specifies the procedures around presidential transitions, including when the election outcome is disputed, to ensure the peaceful transfer of power from one administration to the next.

That's another pushback to the way Trump blocked President Biden's team from accessing some information for his transition to the White House.

The second proposal, revolving around election security, would double the federal penalties to up to two years in prison for individuals who "threaten or intimidate election officials, poll watchers, voters or candidates," according to the summary.

An Associated Press review of potential cases of voter fraud in six battleground states found no evidence of widespread fraud that could change the outcome of the election. A separate AP review of drop boxes used for mailed ballots also found no significant problems.

The need for election worker protections was front and center at a separate hearing Wednesday of the House Committee on Homeland Security. Election officials and experts testified that a rise in threats of physical violence is contributing to staffing shortages across the country and a loss of experience at local boards of elections.

"The impact is widespread," said Neal Kelley, a former registrar of voters in Orange County, California, who now chairs the Committee for Safe and Secure Elections. "And, while the effects on individuals are devastating, the potential blow to democracy should not be dismissed."

"Unfortunately, we are still on a daily basis, in my state and across the country, living with the reverberating effects of the 'Big Lie' from 2020," she said. "And, as we all know, when it comes to leadership, what you say from the very highest echelons of government power in this country do have those reverberating effects."

Some Republican members of the committee condemned violence against election workers — and also drew a parallel to recent threats and intimidation directed toward some Supreme Court justices after their decision to overturn constitutional protections for abortion.

GOP Rep. Clay Higgins of Louisiana rejected the notion that Trump and other election skeptics were solely responsible for the "atmosphere of mistrust" that grew up around the 2020 election.