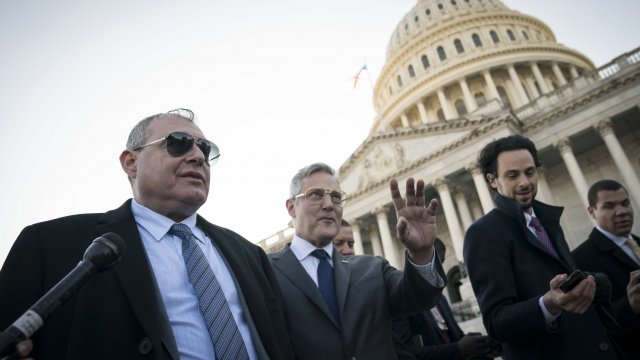 Senators in the president's impeachment trial are in the middle of two days of questions before a vote on hearing from new witnesses.

Senators will make that decision as soon as Friday.

Bolton reportedly corroborates the claims against President Trump in his upcoming book, saying he knows firsthand that the president linked security aid and a White House meeting for Ukraine to domestic political investigations.

President Trump's team says Bolton testifying would be inadmissible evidence and drag out the trial.

"The president would have to have his opportunity to call his witnesses," deputy counsel for the president Patrick Philbin told senators.

The Democratic impeachment managers pressing the case against President Trump urged lawmakers to hear from Bolton.

The day began with a bit of spectacle in the halls of Congress. Lev Parnas, a former associate of the president's personal attorney Rudy Giuliani, roamed the halls telling senators to hear from him.

"We need to call witnesses," Parnas told reporters. "The truth needs to come out. I'm here. I'm one of the most important witnesses, between me and John Bolton."

Parnas wanted to watch the trial from inside the Senate chamber, but he was wearing an electronic ankle monitor in connection with federal charges in New York. Senate rules don't allow outside electronics, so Parnas could not get in.

His attorney teased more evidence is likely to emerge.

"We do have a couple other recordings that probably will come out, will surface," Joseph Bondy said. "One is an event at Mar-a-Lago, some are at the inauguration or other fundraising-type events."

On Friday, senators are likely to vote on the question of hearing from new witnesses and collecting more documents. Without a go-ahead to gather more evidence, senators then may vote quickly on the ultimate impeachment question: whether to remove the president from office.