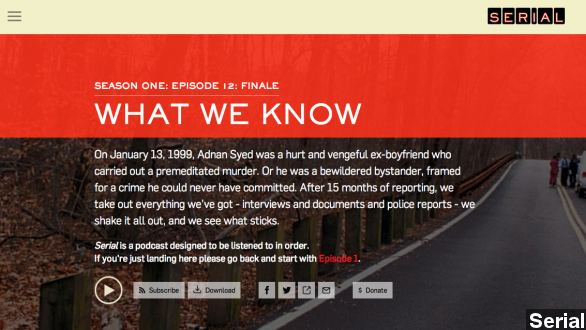 The "Serial" finale might not have tied a neat little conclusion together for the murder of Hae Min Lee, but it should never have been expected to.

The hugely-popular podcast "Serial" has aired its first season finale, capping off a two-and-a-half-month run that that drew in millions of newly-obsessed fans. If you are worried about spoilers for the latest episode, you might want to stop watching now.

"This is a call from Adnan Syed​, an inmate at a Maryland correctional facility."

Coupled with catchy theme music and intriguing interviews with witnesses, lawyers, forensic experts and friends of both Syed and Lee, "Serial" has made for engrossing entertainment over its 12-week-run. (Video via WMAR)

It broke the record for fastest podcast to reach 5 million downloads and streams on iTunes and consistently reached over a million listeners with each episode.

Comparisons have even been made to in-depth crime-dramas like HBO's "True Detective," but the finale of "Serial" serves as a reminder that Adnan Syed's case isn't fiction, refusing to serve up a tidy conclusion.

The final episode introduces some new information, but Koenig doesn't make any sweeping reveal that she says should settle the case.

Instead, Koenig says, based on the way the evidence was presented, as a juror, she would not have convicted Syed, but as a journalist she remains skeptical of his innocence.

This inconclusive ending will likely disappoint some, but as a New York Times writer puts it: "Unlike the conclusions of Agatha Christie novels, real life can make only murky puddles."

But what can be said about "Serial" is that its explosive popularity has people looking at podcasting in a whole new light.

A pop culture expert at Syracuse University tells Wired, "As people discovered that podcasts can be compelling in their regular media consumption, maybe we should’ve seen Serial coming from a mile away.”

"Serial" has shown podcasts can be attractive to sponsors as well. The Guardian reports Mail Chimp, the shows main sponsor, has seen an uptick in engagement on social media.

Which is probably what led to Squarespace and Amazon's Audible hoping on board to advertise later in the season.

"Serial" is definitely getting a second season sometime in 2015, thanks in part to donations from listeners. Koenig hasn't said what her next topic will be, but we know it won't be about the Syed case.