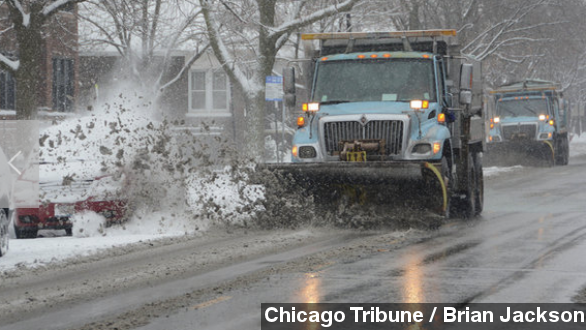 ​A weekend winter storm system moving its way across the country has killed at least three people in Mississippi and Missouri.

​A weekend winter storm system moving its way across the country has killed at least three people.

It's what a severe weather expert for AccuWeather calls a "spring storm stuck in a winter pattern."

The freezing rain, snow and ice have arrived during the busiest travel month of the year. AAA estimates some 94 million people will travel at least 50 miles over the holiday season. (Via NBC)

An ice storm is in the forecast for much of the Northeast. By Sunday morning, at least 2 inches of ice had accumulated in parts of upstate New York. (Via YNN)

And much of the southeast and central parts of the country were pelted with heavy rainfall Saturday. (Via CNN)

Up to 7 inches of rain fell on parts of Arkansas overnight. Officials there say two tornadoes touched down Saturday night, injuring several people. (Via KARK)

In Mississippi, officials say two people died due to the storms. One man died when the strong winds flipped over his mobile home. The other was killed when his car hit a tree on a county road. (Via WJTV)

And The Kansas City Star reports icy roadways were likely to blame for the death of a Kansas City, Mo., man whose car flipped over a guardrail.

Interestingly, the mid-Atlantic region was spared from the heavy rainfall, according to CNN. New York City, Philadelphia and D.C. had above-average temperatures Saturday.

But there's some good news from a meteorologist for the National Weather Service, who told USA Today he expects "tranquil" weather for Christmas Eve and Christmas Day.