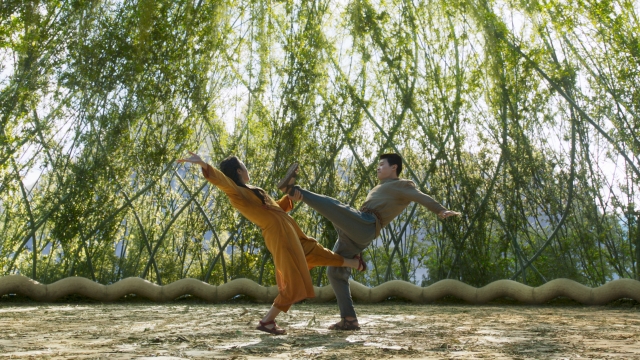 The debut story of Shang-Chi in 1973 was rife with racial slurs and he was introduced as the son of the infamously offensive caricature Fu Manchu.

"Shang-Chi" tells the story of a martial arts master confronting his dark past. That's the plot of Marvel's new superhero movie, but it's also an apt description of the franchise's reckoning with its racist comic book origins almost 50 years ago.

Ron Han, founder of POC Culture, says, "Over the course of numerous decades — his initial run of his book had 125 issues — and never had he had an Asian writer telling his story until Gene Yang, which is essentially last year."

Shang-Chi debuted in 1973 during a peek of popularity for martial arts fiction. But his comic was rife with racial slurs and he was introduced as the son of the infamously offensive caricature Fu Manchu.

"Fu Manchu represents like a lot of the 'Yellow Peril' stereotype of that time, where there was the sense of this like evil, exotic Asian coming from the east," Han says. "They were defined by very exaggerated, stereotypical characteristics: very extreme slanted eyes, a long beard and a long yellow face."

Fu Manchu was created after years of WWII propaganda and caricaturized depictions of Asian people in shows like the Looney Toons or films like "Breakfast at Tiffany's."

"This film is a big step in reclaiming the kind of injustice in pop culture, especially in Western media," Han says. "Shang-Chi, from the very beginning in the film, is clearly a character that is multifaceted, that is funny, that has relationships, that isn't just like this stereotype."

For many Asian critics and audiences, that's the way to reconcile Hollywood's past harmful depictions and re-introduce audiences to characters that are more than just caricatures or tropes.

The way to do that well is to actually have Asian American creatives like "Shang-Chi" director Destin Daniel Cretton and writer Dave Callaham tell the stories.

"For me, on a very personal level, I do martial arts. I love martial arts. I love watching it. And it has been really frustrating to see that become a trope," says founder of Mediaversity Reviews, Li Lai. "So, I love that a lot of Asian and Asian diasporic creatives are being able to reinterpret that."

From HBO Max's "Warrior," the CW's "Kung Fu" to Netflix's "Paper Tigers," "Shang-Chi" is one of several projects today — written and directed by Asian American artists — that are re-writing Hollywood's past wrongs.

"Even over just the last three, four or five years, I'm so excited about people who are actively addressing I think like previous wrongs in a way without having it be too moralizing," Lai says.

After a year of heightened attention on the attacks against AAPI communities, Asian writers, directors and actors are confronting Hollywood's racist depictions with a greater sense of responsibility.

"When people say like, 'what's the big deal?' 'Who cares?' For a lot of people, their first experience with an Asian person is somebody they've seen on TV or a movie, and then automatically the assumptions are established and rooted," says Han.