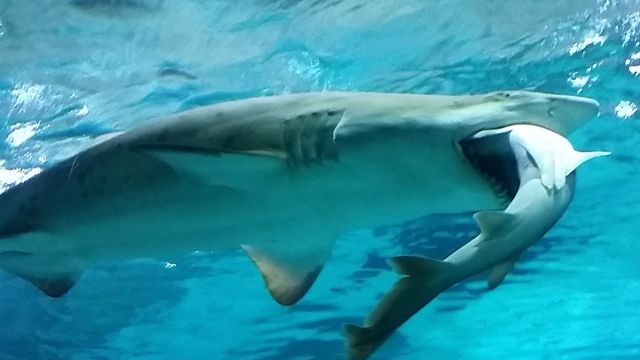 Has your roommate ever been so invasive that you ate them? No?

A female shark at a Seoul aquarium apparently got annoyed at her tank-mate invading her personal space. So she ate him.

The sand tiger shark took her sweet time with her revenge, eating the banded hound shark for 21 hours starting with his head.  (Video via Daily Mirror)

In the sand tiger's defense, he was bumping into her and she might have taken the first bite out of surprise.

According to National Geographic, sand tiger sharks "are a docile, non-aggressive species, known to attack humans only when bothered first." Apparently this also applies to their fellow sharks.

The cannibal shark is the aquarium's biggest, at 7.2 feet long. The shark she ate was only about four feet long, which is a lot bigger than a sand tiger's typical meal of small fish.

The aquarium said the shark will not be able to digest its meal and will regurgitate her former roommate after a week. (Video via Daily Mirror)