Sharks In Australia Begin Sending Their Own Tweets 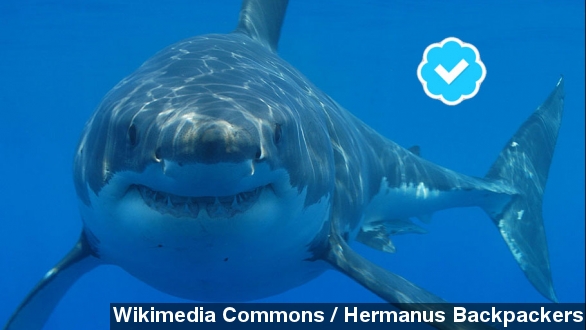 A new program uses shark location tags to instantly alert swimmers and surfers if a large shark gets within a kilometer of the beach.

Western Australians are putting sharks on Twitter — and no, it's not a joke. In fact, it could save lives.

While there's already a shark on the site, doing things like swimming, lurking and following Seal, this new feed is different: it tells surfers and swimmers when a large shark is approaching the Western Australian shore. (Via Twitter / @TheAverageShark, @SLSWA)

​"Scientists have attached transmitters to well over 300 sharks like this 4-meter-long great white. When a tagged shark swims within about a kilometer of the beach, it triggers an alert." (Via Sky News)

And those alerts are turned into tweets on the Surf Life Saving WA Twitter feed, broadcasting the location of the shark within seconds.

The feed is meant to help beach goers know when they might just want to avoid the water. Sadly, the area has seen a spike in shark attacks.

The state doesn't want tourists to be afraid to visit its beaches. But the government's plan to prevent shark attacks is, well, pretty controversial.

"This is what the government is banking on to reduce shark attacks: baited hooks a kilometer off popular beaches and surf breaks between September and April." (Via Channel Seven)

The shark traps would be patrolled by fishermen, who would be licensed to shoot and kill any sharks longer than three meters. (Via Perth Now)

Opponents have dubbed the plan a cull, saying there's no evidence reducing shark populations will actually reduce the risk of attack. (Via YouTube / Mike Richards)

Other Australian states already have similar shark baiting programs, but the shark tweets — that's new. The tags tracking the sharks are said to work for around 10 years.