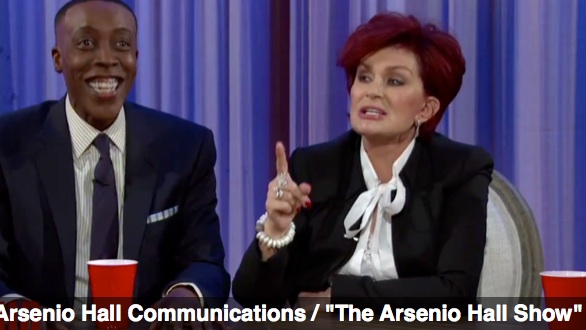 Sharon Osbourne blasted her "The View" co-hosts on The Arsenio Hall Show.

Sharon Osbourne wasn't shy about telling the world how she really feels the hosts on "The View" during an interview with Arsenio Hall Wednesday.

"I love Barbara Walters. The rest can go f--- themselves." (Via Arsenio Hall Communications / "The Arsenio Hall Show")

Yeeeah. It all started when Arsenio asked Sharon and the other ladies of "The Talk" what the difference is between their show and "The View." (Via Us Weekly)

Julie Chen started to answer by saying she and the rest of "The Talk" cast "do not discuss politics" and "do not debate."

Before she could finish, Sharon made her feelings pretty clear. (Via Arsenio Hall Communications / "The Arsenio Hall Show")

Aaaaand then let "The View" hosts — well, everyone except Barbara, have it. (Via ABC)

Now, you might be wondering if whatever was in those red cups helped Sharon speak a little more, ahem, honestly.

According to The Huffington Post, Arsenio decided to give his guests some alcohol to loosen them up. After Sharon's rant, Aisha Tyler said, "You're learning what we know, which is never give Sharon alcohol before she goes on camera."

But "The View" versus "The Talk" isn't really a new concept.

Back in September, Julie Chen warned "The View" not to follow in "The Talk's" footsteps... (Via CBS)

Though some TV critics have dubbed "The Talk" "the CBS knockoff of 'The View.'"(Via CBS)

No responses yet from Whoopi Goldberg, Sherri Shepard or Jenny McCarthy.