'She Said' Film Explores How The Weinstein Story Broke, Its Aftermath 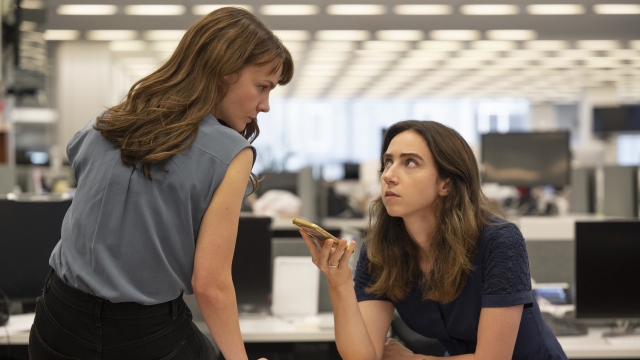 Five years after the emergence of the #MeToo movement, the story that started it all is getting a treatment on the big screen.

Five years later, as activists continue to work to reform the entertainment industry, a new film "She Said" is telling the story of the investigation that started it all.

"When I read the first New York Times piece, and I saw that people were speaking up, and there seemed to be a sort of general consensus of believing these women, it made me feel like I could tell my story," actress Sarah Ann Masse said. "I wanted to tell my story because I thought it could help other survivors."

Masse plays Pulitzer Prize-winning reporter Emily Steel in the new film. But beyond her work on-screen, the story of "She Said" is personal.

Following the New York Times' explosive report, she too came forward with her own allegations against Weinstein and became a major voice in the movement to reform Hollywood.

Masse said that after speaking out against sexual misconduct, she and other women faced retaliation in Hollywood — being told to stop speaking out and finding fewer opportunities for work.

In 2020, she launched the organization Hire Survivors Hollywood to advocate for others facing retaliation and help studios create safer, supportive work environments for survivors.

"There are barriers to entry and advancement when you have faced abuse," Masse said. "You don't want to work with people who are known abusers. You're afraid that somebody might be in a project. You're not sure if you'll be safe. So, I just wanted to kind of change the narrative around that and find solutions to push through it."

How NDAs Can Hide Stories Of Sexual Misconduct

NDAs are creating issues in the workplace, for allegedly hiding sexual misconduct among employees.

A 2018 report from USA Today and the National Sexual Violence Resource Center surveyed more than 800 women in entertainment and found that 94% experienced sexual harassment or assault.

"One thing that I really appreciated about 'She Said' is that they did make efforts to be inclusive of survivors — of Weinstein survivors," Masse said. "Obviously, they couldn't include every single Weinstein survivor; unfortunately, there's hundreds of us who have come forward publicly. But my understanding is that they consulted with women who are depicted in the film early on. They auditioned several survivors. I was lucky enough to be one of the ones who was cast, and I think it's a really good example of how that can be done."

Going forward, Masse hopes the entertainment industry can become a safer, more supportive place for the many survivors of sexual harassment and misconduct.

"I want other survivors to know that there is hope," Masse said. "There is healing, there are opportunities and I'll do whatever I can to keep building those opportunities for survivors and advocating for all of us."