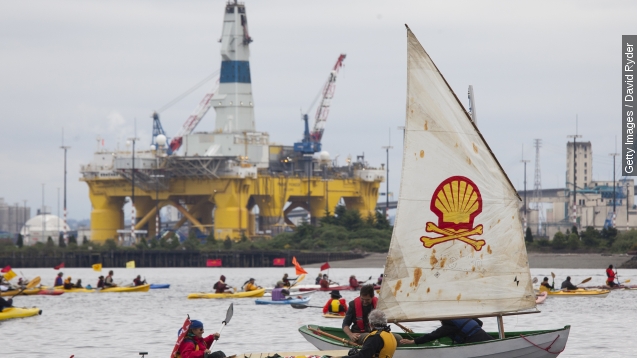 Shell ended its exploration for oil in Alaska's Chukchi Sea after big drop in oil prices. It's a victory for those with environmental concerns.

Shell has ended its exploration for oil off coastal Alaska.

"This coming after it failed to find enough oil in the region," CNBC's Andrew Ross Sorkin reported.

The price tag for that failure? $4.1 billion. (Video via Shell)

"The unpredictable regulatory environment that the U.S. has in place there has made it very difficult for them to work," a Bloomberg anchor reported.

But that's hardly the end of the story.

Shell's venture into the Chukchi Sea was always going to be risky.

"It's being called the worst oil spill ever in Alaska," the ABC news anchor read.

From an environmental standpoint, it raised fears of another Exxon Valdez spill. Like with that spill, the Chukchi Sea's remote location would complicate the response to a spill. (Video via History Channel, U.S. Geological Survey)

But it was also risky from a financial standpoint.

"Oil and gas prices are down big, and right now, there is no up," CBS' Jeff Glor said.

If you haven't noticed, oil prices are down, and they have been pretty consistently low.

That means making money off of oil is more difficult than usual.

"Lower for longer is the new way of looking at it," analyst Fadel Gheit said on Fox Business.

But it's the "unpredictable federal regulatory environment" part of Shell's statement explaining its decision that will raise some hackles in Alaska. (Video via KTUU)

"I would suggest to the administration that the fight is on, and we are not backing down," Alaska Sen. Lisa Murkowski said during a press conference. (Video via U.S. Senate Committee on Energy and Natural Resources)

Alaska's political establishment has pushed for less regulation when it comes to oil exploration, arguing that the state's budget depends on oil.

It was one of the main issues raised during the president's recent visit to Alaska. For his part, the president has proposed expanding protected areas in Alaska. (Video via The White House)

"My Department of Interior has put forward a comprehensive plan to make sure that we're protecting the refuge," the president said.

That means the fate of expanded drilling in the state could rest on whoever takes over for him in 2017.

This video includes images from Getty Images and music from "Ergo" by Birocratic / CC BY 3.0.