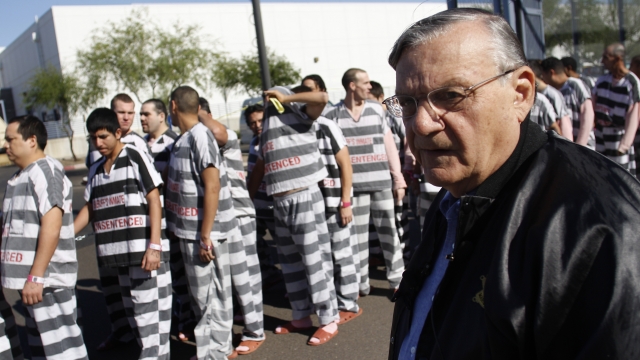 A federal judge says Sheriff Joe Arpaio of Maricopa County, Arizona, should be charged for criminal contempt of court.

"I don't make the laws. I enforce them," Maricopa County Sheriff Joe Arpaio said in a 2012 re-election commercial.

The judge on Friday recommended the Maricopa County sheriff and three of his subordinates face criminal prosecution over a yearslong racial profiling controversy.

Judge G. Murray Snow said in his decision that Arpaio and his chief deputy violated a 2011 injunction that aimed to prevent the department from racially profiling Latinos. Snow also said the two made various false statements to the court.

Snow's call for charges comes roughly three months after the judge found Arpaio and his deputies in civil contempt of court. According to the decision, Arpaio "intentionally disobeyed" the 2011 injunction.

SEE MORE: More Undocumented Immigrants Have Left US Than Entered Since 2007

Arpaio has gained national attention for his policing of people in the country illegally and making inmates live in tents and wear pink underwear.

Critics have called his jail's treatment of the inmates inhumane. Arpaio has defended it, saying it has saved taxpayers millions of dollars.

He is currently running for his seventh term as sheriff and has reportedly raised nearly $10 million for his campaign.

The U.S. Attorney's Office will decide whether to prosecute the four. If it doesn't, the judge could still order a special prosecutor to pursue charges.