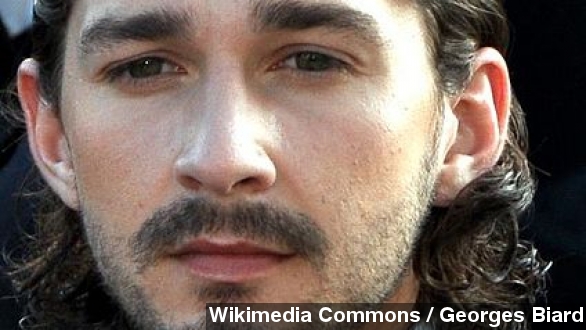 Actor Shia LaBeouf is under fire for releasing a short film that borrowed heavily from a graphic novel.

Apparently, actor Shia LaBeouf didn't learn his lesson after he was accused of plagiarizing a short film made available online Monday.

The apology he tweeted out the very next day on the subject was also reportedly plagiarized. (Via E! / "Chelsea Lately")

The actor's short film, "HowardCantour.com" first premiered at the Cannes Film Festival Critic's Week Sidebar in 2012. But it wasn't posted online until this week. (Via Shia LaBeouf)

According to BuzzFeed, the film is "almost a direct adaptation" of the comic — but LaBeouf never mentions Clowes' work in the movie's promotions or credits.

And Clowes wasn't too happy with the film's striking resemblance to his comic.

He told BuzzFeed, "I’ve never spoken to or met Mr. LaBeouf... and I was shocked, to say the least, when I saw that he took the script and even many of the visuals from a very personal story... and passed it off as his own work. I actually can’t imagine what was going through his mind."

When word got out, LaBeouf posted an apology to Twitter, saying, "Copying isn’t particularly creative work. Being inspired by someone else’s idea to produce something new and different IS creative work." (Via Twitter / @thecampaignbook)

Which sounds eerily similar to a four-year-old entry on Yahoo! Answers that reads, "Merely copying isn’t particularly creative work, though it’s useful as training and practice. Being inspired by someone else’s idea to produce something new and different IS creative work, and it may even revolutionalize [sic] the ‘stolen’ concept."

No response from LaBeouf on this latest plagiarism allegation — but this isn't the first time the actor has been accused of calling other people's work his own. (Via Media Pro Pictures / "Charlie Countryman")

Back in February, LaBeouf reportedly copied text from an Esquire article and pasted it into an email he sent Alec Baldwin apologizing for their "creative differences" while working together on their Broadway show "Orphans." (Via Daily Mail)