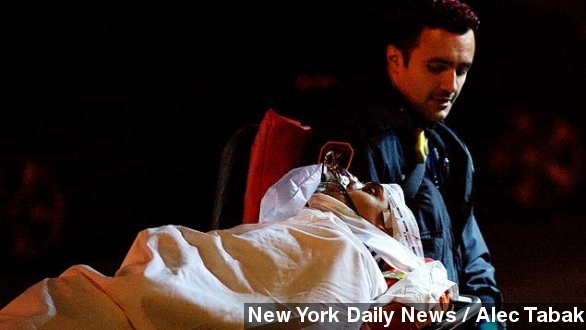 A shooting at the Bryant Park ice-skating rink in New York City left two people injured. Police have a 16-year-old boy in custody.

Police have a 16-year-old boy in custody after two people were injuried in a shooting at the Bryant Park ice-skating rink in New York City.

Saturday evening, a 14-year-old was reportedly shot in the back, and a 20-year-old was shot in the leg. Neither injury seems to be life-threatening, but many are reporting the lower half of the young boy's body has gone numb. (Via WABC)

According to a spokesman for the rink, the park is virtually crime-free, which made the shooting all the more terrifying and chaotic.

"It was a big stampede. Everyone ran out. No one knew what was going on. It was chaos." (Via WCBS)

A 15-year-old skater who frequents the park told the New York Post the Bryant Park Ice Rink is "the safest place you can be. ... This is the last place I thought something like this could happen."

According to police, the shooting came from a dispute between the 20-year-old who was shot and the 16-year-old who is in custody.

Authorities say the suspect tried to steal the victim's coat. And when the victim refused, the suspect left and returned with a gun, firing three shots into the crowd. (Via WNBC)

The park reopened Sunday morning, but the The Wall Street Journal writes an incident like this could change the culture of the park.

"The incident disrupted a sense of security at Bryant Park, once a symbol of urban decay that has become a haven for tourists and Midtown workers."

The 16-year-old is in custody, but charges against him have not been filed.