Who Should Pay For Immigrant Kids' Lawyers In Deportation Cases? 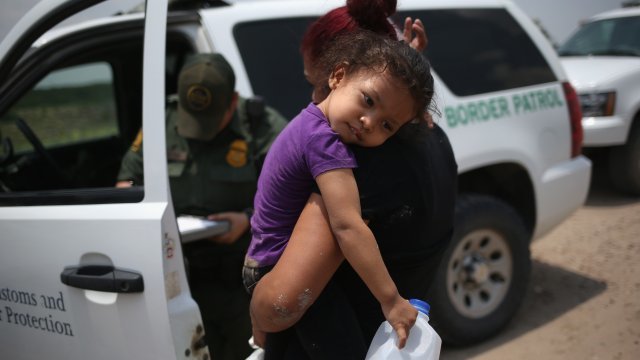 Unlike most defendants in criminal courts, immigrants facing deportation — including children — don't get a free lawyer if they can't afford one.

"I just needed a lawyer to convince the judge that I needed to stay here," said Thiago, who made the journey as an unaccompanied 14-year-old from Honduras to the U.S. border in 2014. "If they were going to send me back to Honduras, they were going to kill me if I didn't join the gang. They killed like one of my family members."

The young migrant asked Newsy to hide his identity for safety concerns and because he doesn't want to compromise his ongoing immigration case.

"Nobody was going to help me there, the police they don't do anything. So, I just wanted to leave," he said.

After being apprehended by border patrol agents, Thiago spent nine days in detention centers for children. He was then released to family members in Chicago with his future unclear. A judge would soon decide whether or not he could stay in the U.S.

"I was trying to get a lawyer that was going to be like very cheap for me because my family is a low-income family," he said.

Low-income defendants in immigration courts — including children — don't get a free lawyer like most poor defendants in criminal and juvenile courts. That's because deportation is considered a civil sanction, rather than a criminal one. As a result, the vast majority of immigrants — many of whom don't speak English — have to argue in court on their own and against a trained government attorney.

"What people don't understand, most of the times, is that the stakes at immigration courts are really high," said pro-bono immigration attorney Maria Blumenfeld. "Sometimes, the freedom of immigrants are at stake and even their lives. So, they should have due process to be able to defend those rights and without an attorney, that sometimes is difficult."

Only 37 percent of immigrants in deportation cases between 2007 and 2012 had a lawyer on their side. That number was 14 percent for detained immigrants.

"It is unfortunate that the immigration system requests children to step up and pretend that they comprehend and understand the proceedings when they really don't," Blumenfeld said.

"These children have been through so much but they continue show you that they are so brave and resilient. No matter how adverse the system is, there are worth the fight and every child deserves a voice in immigration court," Blumenfeld said.

While pro-bono attorneys like Blumenfeld have strived for years to represent as many immigrants as possible, they are now getting a financial boost from major cities across the nation. In the wake of Donald Trump's election, New York City, Los Angeles, Chicago, Washington D.C., San Francisco, Boston, Seattle, Denver, Sacramento and Austin  — as well as California and the state of New York — have stepped up their funding to local immigration legal clinics.

But not everyone is a fan of using taxpayers' dollars to pay for undocumented immigrants' legal defenses.

"We have a serious mental health issue in our city, we have a serious crime problem and I wish we would be concentrating on those kind of things as opposed to illegals in our city," said Nicholas Sposato. He was the only Chicago alderman to vote against his city's defense legal fund for immigrants.

The federal government does allocate funds for unaccompanied children's legal services through the Office of Refugee Resettlement.

But for immigration rights groups, that's not enough. They want all immigrants facing deportation to be guaranteed counsel if they can't afford a private attorney. They argue this would not only be fair, but it would also be financially sound. Giving immigrants early access to counsel, they say, would speed up the system and thus reduce detention costs.

But the cases they brought so far against both the Trump and Obama administrations have been rejected. A federal judge said of the most recent challenge that our laws don't "categorically" entitle minor immigrants to public lawyers. And besides, he said, creating a public defender system would "strain an already overextended immigration system."

But since the case was about a child who came to the U.S. with his mother, it's unclear if the ruling extends to unaccompanied minors.

As for Thiago, he eventually found a pro-bono attorney willing to take his case for free. And after years of legal battles, he recently got a green card. He, now, wants to make sure other vulnerable immigrants can benefit from his own experience with the law.

He said: "In the future, I just want to help more immigrants to come here, I want to offer them support and I just want let them know that they have rights here, even though, they don't have like documents or any green cards."