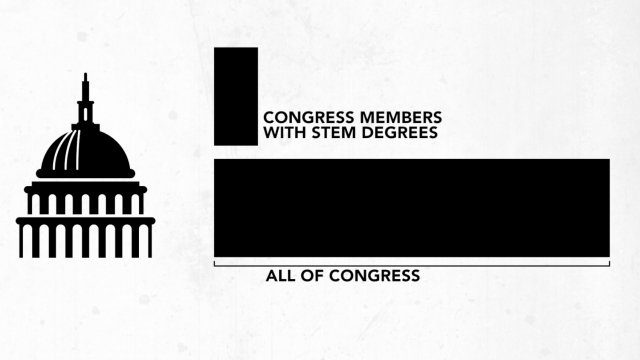 There's a renewed push to get more scientists elected. Would that change anything?

There's a renewed push to get more scientists in office. But why?

Some people don't like how past and present administrations handled science. Others argue the government is too involved in science issues it doesn't understand.

But would more scientists in politics actually change anything?

Some groups think so, like 314 Action. It tries to get more scientists elected and advises them during campaigns. Founder Shaughnessy Naughton said scientists have the background knowledge and a solid understanding of the science issues at hand. She says they know the evidence and they know the facts.

So having more scientists in office might lead to more informed, evidenced-based decisions on science issues. Scientists overwhelmingly agree on many things — like climate change and vaccines — that politicians are still debating.

Scientists in Congress also might help lawmakers avoid embarrassments, like calling fruit fly research useless — without realizing the insects are essential in our understanding of genetics.

Only about 11 percent of Congress has a STEM degree, but only a handful of  that group has worked in their field and even fewer have published research. But all of them almost always support legislation that advances research and funds development.

Science May Not Be Political, But The March For Science Sure Was

Despite claims that the March for Science was nonpartisan, there was a lot of anger directed at President Trump.

But those politicians aren't immune from politicization. According to a survey from Pew Research Center, the scientific community tends to lean left. And Republicans seem to have a long-lasting anti-science reputation. In short, science isn't just political, it's already partisan.

An editorial in Nature argued having more scientists in office would risk the field further losing any sort of bipartisan image and reinforce the idea of scientists as "liberal activists."

Peter Blair heads the National Research Council division on Engineering and Physical Sciences and argues science is already deeply political. In a paper from the National Academy of Engineering, he says the evidence is in the federal government's regulation of science and technology industries, as well as its funding of basic research.

Naughton, who's with 314 Action, says she thinks more scientists in office would ease politicization. Opinions might still differ, but she said she hopes scientists would make decisions based on fact, not political ideology.

And scientists who don't want to leave the lab can still inform and educate the public, which might still help push evidenced-based policy decisions.