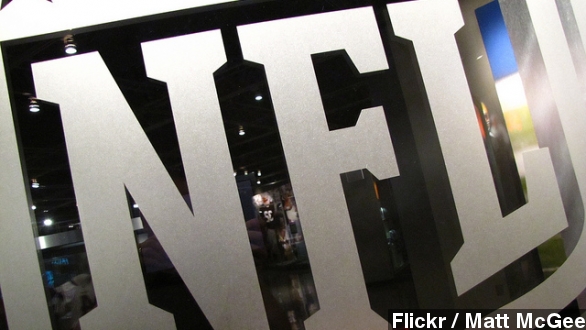 The NFL brings in billions of dollars in revenue but enjoys a significant tax break, as do other leagues. A growing movement seeks to change that.

The National Football League is the most lucrative sports league on the planet, raking in an estimated $9 billion in revenue every year. But most of that revenue is tax-free. Now a growing movement seeks to change that so the NFL and other multibillion-dollar sports leagues pay up like any other business.

Andy Kroll from Mother Jones notes the "anti-corruption organization" Rootstrikers has thrown its support behind a bill from U.S. Sen. Tom Coburn that seeks to amend the tax code for pro sports leagues.

Coburn is the fiscal conservative who authored the 2013 "Wastebook," his annual countdown of stuff the government spends too much money on — such as 3D pizza printers for astronauts. (Via CBS, Popular Science)

Coburn's bill, known as the PRO Sports Act, seeks to prevent pro sports organizations from enjoying tax-exempt status if they make more than $10 million annually — which is, like, all of them.

The bill reads in part: "The tax code's overly complex rules and loopholes allow corporations and other organizations to take advantage of provisions hardly intended for them. Major sports leagues are no exception." Coburn also calls out the PGA Tour, the National Hockey League and the U.S. Tennis Association. (Via Office of Sen. Tom Coburn)

So how exactly did a multibillion-dollar pro sports league get such a massive tax break? Well, the NFL is organized as a 501(c)6 tax-exempt organization, like chambers of commerce.

A USA Today writer explains, "The tax exemption applies only to the NFL's league office, which schedules games, writes the rules that govern the estimated $9 billion-a-year league, runs the college draft and pays salaries of game officials and front-office executives — including Commissioner Roger Goodell."

Jeremy Spector, the NFL's outside tax counsel, defends the tax break, saying the league office is separate from the profit-earning part of the company. The front office actually posted an operating loss in 2011. Spector added, "You don’t make any money by putting on the college draft or hiring referees." (Via Politico)

Politico reports the NFL is in full compliance with the law, and many analysts argue it's the law, not the league, that's problematic.

But a Forbes writer says the NFL is awarded tax favors upward of $1 billion a year. He writes, "Almost all of that is in the form of publicly financed stadium construction or property and other tax rebates granted as part of stadium deals."

Maybe another sticking point in the argument against the tax-exempt status is that the cost of those stadium construction projects fall on the shoulders of taxpayers — 70 percent, according to a Harvard professor of urban planning, Judith Grant Long. (Via The Atlantic)

A writer for The Atlantic adds: "Many cities, counties, and states also pay the stadiums' ongoing costs, by providing power, sewer services, other infrastructure, and stadium improvements. When ongoing costs are added, Long's research finds [12 teams] have turned a profit on stadium subsidies alone — receiving more money from the public than they needed to build their facilities."

Coming back to Coburn, his bill hasn't been the most popular piece of legislation; he's failed to get any of his colleagues to co-sponsor it.

But the supporters of a Change.org petition hope to turn the tide. The petition for Congress to revoke the NFL's tax-exempt status has more than 300,000 signatures.

Coburn previously estimated the tax amendment could "generate at least $91 million of federal revenue every year" from the NFL and the NHL alone. (Via Businessweek)

But for some lawmakers, it could be more of a matter of fairness. According to Politico, the nonpartisan congressional Joint Committee on Taxation estimates repealing the tax code for all pro sports leagues would only bring about $109 million over 10 years — just a drop in the bucket for the government.