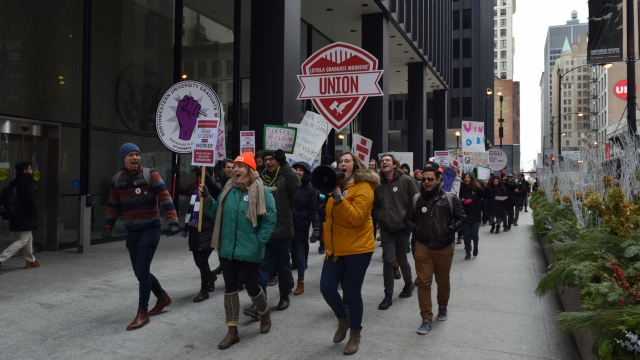 Grad students teach classes, grade papers, conduct research and create syllabi, but they're not always guaranteed the same pay or benefits as workers.

Grad students at Northwestern, University of Chicago, Stanford and Harvard, among others across the country, are protesting what they call unfair working conditions. Because they are labeled "students," they receive low stipends with little or no benefits and no negotiating power. That's central to the debate on whether grad students should be considered students or workers.

Kitty Yang, graduate student at Northwestern University, said: "The university is being run like a business. ... They extract all this labor from us: the grading, the research. But they don't let us actually be workers and unionize."

Presidential candidate Sen. Bernie Sanders said this system "has been going in the wrong direction" and introduced a bill in late January to recognize students as workers. He said "stronger unions and worker protections are a key part of solving this crisis" and criticized the National Labor Relations Board, or NLRB, for stripping graduate workers of their rights instead of protecting them.

Jonathan Holloway's appointment as president was approved by Rutgers Board of Governors Tuesday.

While the NLRB currently considers all grad students employees, protests were spurred by its proposed ruling that private university and college students no longer be considered workers. The organization invited public comments until Jan. 29 and told Newsy it doesn't know when it'll make the ruling official. It's important to note that this is the third time the NLRB switched its stance since 1972. The president-appointed board usually decides based on his or her politics regarding unions.

Instead of waiting for the NLRB decision, students like Reese Richardson have joined grad student unions to fight for union recognition and workers' rights at their schools. Richardson's university, Northwestern, echoed the NLRB's position in a statement: "Classifying students as employees would significantly change the relationship between students, their faculty mentors, and the University. ... Unionization and collective bargaining are not the appropriate methods."

Richardson: "You're not allowed to get a second job, ... so you can't have any supplemental income. And the end all, be all is you have to survive."

Is The U.S. On The Brink Of A Class War?

It's not just income that's dividing the upper and lower classes.

At Northwestern, Richardson gets his tuition waived and works 40 hours a week, on top of his classes, to earn a stipend of about $33,000 a year. He still has to pay for books, food, student activity fees and housing. Northwestern's main campus is located in Evanston, which is 10% more expensive than Chicago, so Richardson can't afford to live close to his school. He makes $16 an hour, but you have to make $18 an hour to afford the average studio apartment in Chicago.

Richardson: "I'm very fortunate in that I'm still on my parents' plan for health insurance. ... And my family's also close-by. So if I need support or if I need a place to stay, I can always turn to them for help. For a lot of people, that's not the case."

The financial pinch is felt even harder by women, underrepresented minorities and international students. A study by the Council of Graduate schools found that more than half of grad students were stressed about their finances. Women and underrepresented minorities were the most stressed. The Center for Responsible Lending found nearly 85% of black bachelor's graduates carry student debt, compared to 69% of white graduates.

So imagine a Ph.D program that takes five or six years to complete. Black and Hispanic students tend to carry higher educational debt than their counterparts. Combined with an insufficient stipend, it can make higher education accessible only to those who can afford it.

Puerto Rico Has Reopened 20% Of Public Schools After Earthquakes

Around 240,000 students were unable to return to class Tuesday.

Bruce Kovanen, a doctoral student at the University of Illinois at Urbana-Champaign, said: "We can't eat tuition waivers, you know. Tuition waivers don't pay for groceries. They don't pay your rent or your bills. And so that's part of the importance of pay along with tuition waivers."

In the coming months, students say we can expect more unionizing and protests.

Richardson: "Regardless of the outcome of the NLRB's proposed ruling, we're going to continue building power at this university."