Should This Church Cancel Its Pig Wrestling Event? 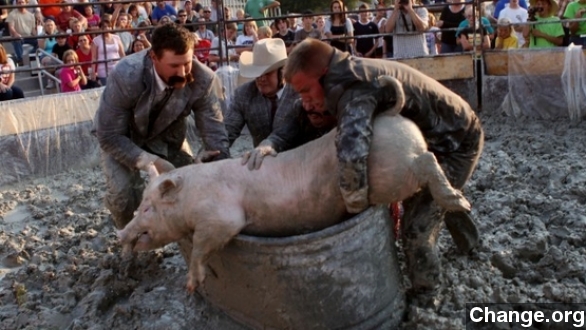 A Wisconsin church is getting criticism for its "Pig Rassle" event, but the opinions of protestors and supporters are completely contradictory.

A Wisconsin church is receiving a lot of criticism for its annual pig wrestling event, which raises money for the parish.

Pig wrestling takes place across the country. It generally happens in a mud pit where teams have to catch a pig, as this group is doing in a similar event. At St. Patrick Parish, they have less than a minute to do so and touch some part of the pig to the top of a barrel. (Video via YouTube / Shermanbay)

But a petition started by the Global Conservation Group of Watertown, Wisconsin, claims the event is a violation of Wisconsin Chapter 951, which prohibits animal fights. The petition has reached more than 60,000 signatures.

The thing is, though, there are two very different sides to this story. Activists for the change say the pigs are "punched in the face, body slammed and yelled at." That, of course, sounds awful.

But the church says that's not true, stating on its website, "Consideration is taken to ensure that the pigs are safe and free from any abuse."

Here are two videos the World Animal Awareness Society posted showing the church's event. You don't see any punching of the pigs in these videos. The pigs are chased and wrestled.

WJFW: "I hope this is a tradition that ends someday just like other awful traditions in human history."

WGBA: "If you look at these pigs over here right now, they are just wildly in this mud, and they just love it."

WLUK: "It's just a fun time for everybody to come down and watch."

The most recent competition took place over the weekend. The "Pig Rassle" has been going on for years.