Should We Call The WDBJ Shooting A Hate Crime? 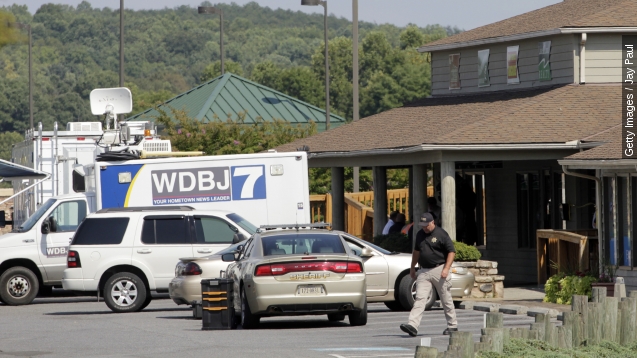 A Fox News host along with many others online are questioning why the shooting of two WDBJ journalists isn't being called a hate crime.

The suspect in Wednesday's double murder of two reporters working for a Virginia news station is dead, and now begins the job of investigating what lead him to kill his former coworkers. And a controversial question has been raised online: Should the media call the shooting a hate crime?

ABC reported Wednesday that someone claiming to be the shooter faxed the ABC newsroom a 23-page document full of violent thoughts and personal grudges.

But the excerpts released by the network also show a mind obsessed with racial tension.

"'The church shooting in Charleston was the tipping point, but my anger had been building steadily.' ... He suggested that he was mistreated because he was a gay black man," ABC reported.

That lead to the question of whether the shooting should be called a hate crime.

"He shot three white people today. Why is that not a hate crime?" Fox News's Gretchen Carlson asked.

"Because of the fact that the workplace violence offender is clearly delusional. They make up their own sense of reality," security expert Paul Viollis said.

So is he right that the shooting fits the workplace violence profile better than the hate crime profile? First, let's keep in mind that hate crime laws are controversial to begin with, and the media isn't necessarily consistent on what gets called a hate crime.

It's also a tricky legal question. According to the FBI, not just any crime between people of different races counts. It's about whether race is the motivation, which is hard to prove.

The Charleston shooting is a pretty clear cut example. Judging by statements attributed to the gunman, he set out to kill black people, no matter who they were. (Video via CNN)

The Virginia shooting seems more personal. Certain people were targeted for specific reasons, and the earliest information that came out showed a clear workplace conflict. (Video via NBC)

But as more of that shooter's manifesto was made public, it's easy to see why people who are suspicious of hate crime laws would see a double standard.

One excerpt from ABC that's getting a lot of attention asks, "You want a race war? ... BRING IT THEN YOU WHITE" somethings, showing that both shooters saw themselves as part of a broader racial conflict.

Correction: An earlier version of this video misidentified the location of the shooting. The video has been updated.