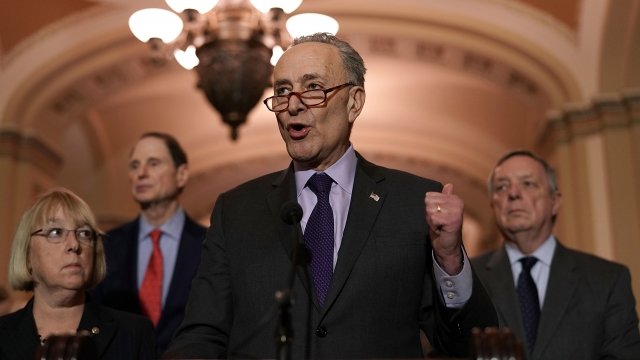 Senate Democratic leader Chuck Schumer met with the president Friday to hash out a deal and avoid a government shutdown.

Senate Minority Leader Chuck Schumer went to the White House Friday to chat with the president about ways to avoid a government shutdown.

"We made some progress, but we still have a good number of disagreements," Schumer told reporters after leaving the meeting. "The discussions will continue."

It's not clear what they discussed, but their conversation likely centered around a GOP-backed bill that would fund the government temporarily. It passed the House on Thursday, and it's sitting in the Senate's lap.

The problem? That bill doesn't address a solution to protect undocumented immigrants who were brought here illegally as kids. Democrats have been saying for a while they won't vote for a bill that doesn't include it. Republicans want to tackle the issue in a separate bill and instead are trying to sell Democrats on funding for the Children's Health Insurance Program.

But now even some Republicans in the Senate are saying they'll vote against the continuing resolution the House already green-lighted. So, the GOP needs even more Democratic support.

The meeting between Trump and Schumer could help the White House push back against the perception that Trump wasn't working hard enough to avert a shutdown. The president previously ruffled some feathers after he sent mixed messages about his priorities for a budget deal.

The White House also confirmed the president canceled a Friday departure to his Mar-a-Lago estate. He was set to hold a fundraiser there Saturday, but in light of the potential shutdown, the president is staying in Washington, at least for now. Vice President Mike Pence is still scheduled to take off Friday evening for the Middle East.