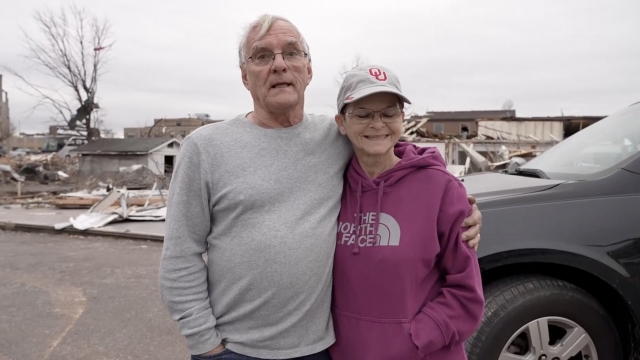 Sean Lynch and Judy Saxton spent decades apart — then devastation brought them together.

A brother and sister are connecting for the first time after finding out they are related. Days after a tornado took out most of Mayfield, Kentucky, Sean Lynch and Judy Saxton finally met after ancestry.com DNA tests led them to one another.

Survivors of the storms in Kentucky tell Newsy about where they sheltered, and the damage they found when the storm was past.

In October, they discovered they shared the same father. Lynch says he never met his biological father, who started another family years later with Saxton's mother.

"I thought I was an only child after my biological brother was killed in 1994 in a car accident," Lynch said.

Through an online DNA test, Saxton's daughter discovered the relation after tracing their family tree.

"She got ahold of him and told him. He thought I was her grandmother," Saxton said. "But then she told him, 'That's my mom so that's your sister. You're my uncle."

Between COVID-19 concerns and their distance — one in Colorado and the other in Kentucky — the chance of meeting in person was small. Then the tornado hit.

Lynch says he drove 14.5 hours from Littleton, Colorado, just to see his sister and deliver essentials like generators, a space heater, food, water and love that only family can provide.

"I told my wife when I found out about her, the only thing I want for Christmas is to hug my sister," he said.

Judy is 67 years old and Sean is 74, so the siblings have a lot to catch up on now that they've been reunited.