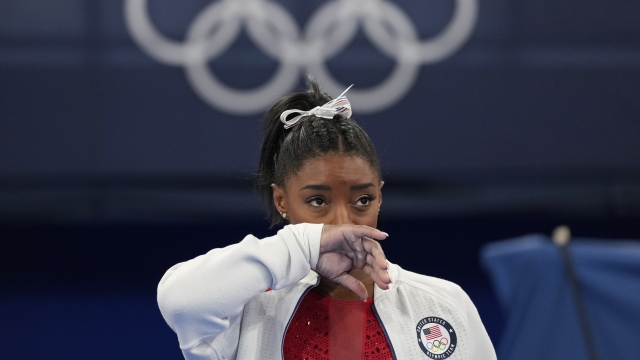 She says the decision will allow her to focus on her mental health.

For decades, they were told to shake it off or toughen up — to set aside the doubt, or the demons, and focus on the task at hand: winning. Dominating. Getting it done.

For years, Simone Biles was one of the very best at that. Suddenly — to some, shockingly — she decided she wasn't in the right headspace.

By pulling on her white sweatsuit in the middle of Tuesday night’s Olympic gymnastics meet, and by doing it with a gold medal hanging in the balance, Biles might very well have redefined the mental health discussion that’s been coursing through sports for the past year.

Michael Phelps, winner of a record 23 gold medals and now retired, has long been open about his own mental health struggles. Phelps has said he contemplated suicide after the 2012 Olympics while wracked with depression. Now an analyst for NBC's swimming coverage, he said watching Biles struggle “broke my heart.”

“Mental health over the last 18 months is something people are talking about,” Phelps said. “We’re human beings. Nobody is perfect. So yes, it is OK not to be OK."

Biles joins some other high-profile athletes in the Olympic space — overwhelmingly females — who have been talking openly about a topic that had been taboo in sports for seemingly forever.

— Tennis player Naomi Osaka withdrew from the French Open, never went to Wimbledon and, after her early exit in Tokyo this week, conceded that the Olympic cauldron was a bit too much to handle.

— American sprinter Sha’Carri Richardson made no secret of the issues she faced as she prepared for an Olympic journey that never happened. She said she used marijuana to help mask the pain of her birth mother’s death, to say nothing of the pressure of the 100 meters.

— Dutch cyclist Tom Dumoulin left training camp in January to clear his head, saying he was finding it "very difficult for me to know how to find my way as Tom Dumoulin the cyclist.” He resumed training in May; on Wednesday, he won a silver medal in the men’s individual time trials.

— Liz Cambage, a WNBA player who competes for Australia, pulled out of the Olympics a week before they opened because of anxiety over entering a controlled COVID bubble in Tokyo that would have kept her friends and family away.

“Relying on daily medication to control my anxiety is not the place I want to be right now. Especially walking into competition on the world's biggest sporting stage,” she wrote on social media.

Biles, though, took things to a new level — one that now makes it thinkable to do what had been almost unthinkable only 24 hours before. She stepped back, assessed the situation and realized it would not be healthy to keep going.

On Wednesday, she pulled out of the all-around competition to focus on her mental well-being.

Additional reporting by The Associated Press .