Sisters Meet For The First Time After 73 Years 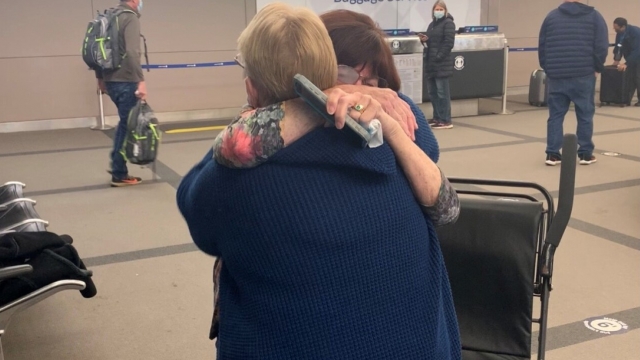 Linda Hoffman and Harriet Carter found each other when they both signed up for Ancestry.com.

After more than 70 years, two women living in different states found out they are sisters.

"I'm so excited. I can imagine what she's thinking," said 73-year-old Linda Hoffman as she waited at Denver International Airport.

Their first face-to-face encounter had been nearly two years in the making. The long-lost sisters found each other by a perfect accident when Hoffman and Harriet Carter, 76, both signed up for Ancestry.com. Carter was given up for adoption at birth when her parents were 18.

Their parents both died decades ago, taking the secret with them.

"I had a message from Harriet saying, 'I think we might be related,'" Hoffman said. "We were 100% match, but our parents never told a soul ever."

Hoffman and Carter have been talking over the phone nearly every day since. Because of the pandemic, they've never met in person until now.

"Oh my God, that's her," Hoffman said with excitement when she spotted her sister at the airport.

"I can't quit staring at you," Hoffman said to Carter as they embraced.

Even before leaving the airport, the two sisters took a step back in time looking at some of Hoffman's old photos, providing a glimpse of memories missed.

"This picture is sad because you're not in it," Hoffman said to her older sister.

"To see all these pictures of the love and the bonding and the closeness ... now that I get older, it's especially relevant," Carter said.

As the two arrived at Hoffman's home, Carter was greeted by a special room of Christmas decorations for her arrival.

"Look at this. I love it," Carter said as she looked around the room.

It's not the time missed they dwell on. Instead, they choose to cherish the time they have left.

"I think we found each other when we were supposed to," Hoffman said.