As Cease-fire Ends In Syria, The Situation May Be Even More Volatile 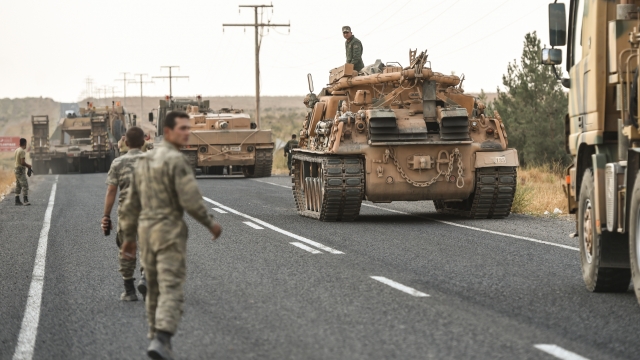 Turkey threatens another assault on Kurdish forces as Syria's Bashar al-Assad vows to fight back against Turkey for "stealing" his country's land.

Turkey's agreement with the U.S. to pause its military assault on Kurdish forces in Syria ends Tuesday night. And already the geopolitical landscape has changed.

Troops loyal to Syrian President Bashar al-Assad pushed into northwest Syria for the first time in a decade, taking advantage of President Trump's decision to withdraw U.S. troops that had been supporting the Kurds' Syrian Democratic Forces.

If that doesn't complicate things, Erdoğan on Tuesday was in the Russian city of Sochi for meetings with Russian President Vladimir Putin, Syria's chief military backer and protector. They announced a deal to conduct joint patrols - and to give Kurdish forces another 150 hours to leave the Syrian-Turkish border region.

So Erdoğan, who says Turkey has seized 900 square miles in Syria since its Oct. 6 invasion, is now relying on that Russian help to remove tens of thousands of Kurdish troops. If he isn't satisfied, Erdoğan said, Turkish forces "will continue to crush the heads of the terrorists."

The Kurds were America's critical ally in leading the military campaign on ISIS, losing nearly 11,000 fighters in the process. They say they're not just going to quit and abandon major Kurdish population centers in the face of Turkish aggression.

All these factors make for a volatile situation in Syria. And apparently, with U.S. troops leaving the Kurds to jeers and hurled potatoes, American influence on the region may have departed with them.

The fate of northwest Syria and the Kurds may be left to Russia and Putin to negotiate.

Erdoğan, whose country is a member of NATO, said he wanted to discuss the situation with "my dear friend Putin."

A Kremlin foreign policy adviser indicated that Russia was eager to broker a solution. Yury Ushakov said: "The most important thing for us to work toward — as we always do — is the long-term stability of Syria and the region, and we believe that this can only be achieved by restoring the unity of Syria."

Turkey wants to remove Kurdish forces from northwest Syria and repopulate the area with hundreds of thousands of Syrian refugees it hopes to remove from its country. Erdoğan said more than 700 Kurdish troops have left the area and another 1,300 were leaving during the U.S.-negotiated pause in fighting.

He said if promises "given to us by America are not kept," Turkey would resume its military assault with "much bigger determination."