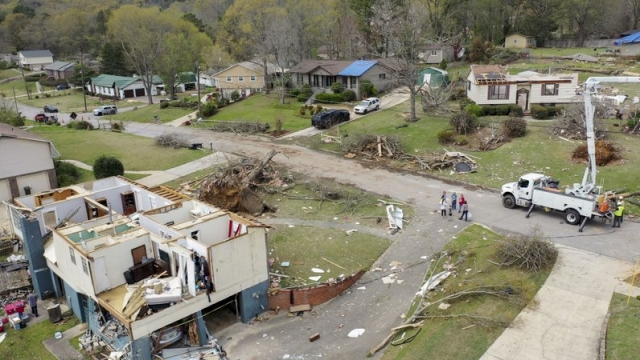 Six people were reported dead after tornadoes ripped through the South on Thursday and Friday.

Across the south... destruction.

Chase Gibbs, a resident of Ohatchee, Calhoun County said: "I worked my whole life to put this stuff in this house and then its just ripped away in one second you know."

Latasha Harris-Ramos, who lost family members in an Alabama tornado, said: "My brother called me and told me that everything was gone and they couldn't find my parents."

At least 14 tornadoes were reported in Alabama alone. According to the National Weather Service, downing trees, destroying businesses and razing homes.

Chief Pat Cheatwood, of the Pelham Police Department, said: "When you drive through these areas, it's very devastating. It broke my heart to see the amount of damage that these homes have sustained."

In Calhoun County, at least five reported dead among those lost, three members of the Harris family

Harris-Ramos said: "I'm in a lot of pain, I'm in shock, I'm numb, I've never felt this kind of stuff before"

And in Georgia, officials reporting at least one fatality in Coweta County after a tornado swept through overnight, with the City of Newman taking the brunt of the damage.

Residents were describing the chaos...

Jim Reeder of Newnan said: "you heard THE TRAIN coming...and it sounded just like it. I've lived through it and phew, don't want to do it again."

Neighborhoods were demolished in an instant...

Reeder said: "This thing was in an out of here in about 3 minutes"

As the storms pass, communities are now facing a difficult road ahead.

Latasha Harris-Ramos said: "We just gotta come together as a family, be supportive of each other."