Hurricanes May Be Getting Slower, Making Them Even More Destructive 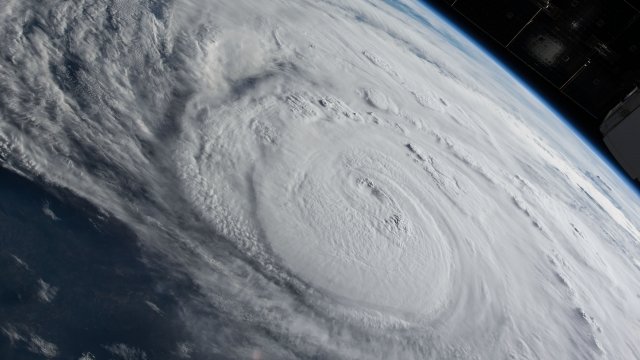 Hurricanes and other tropical cyclones don't move as fast as they used to — and slower-moving storms have the potential to dump a lot more rain.

Scientists expect climate change is going to make tropical cyclones — including hurricanes — more severe. New research shows it could also cause them to move from point A to point B more slowly, which might make them even more dangerous.

"The slower the storm gets, the more rain an area will get," said Jim Kossin. Kossin works at the National Oceanic and Atmospheric Administration's National Centers for Environmental Information.

He just published new research that found Atlantic hurricanes and other tropical cyclones have lost about 10 percent of their speed in the last 70 years.

He and other scientists still don't know exactly why it's happening. But he says there's good evidence that the warming planet could weaken the global winds that push storms around.

"The poles tend to become disproportionately warmer than the tropics do under global warming," Kossin said. "And that has effects on circulation — typically slows it down."

And at the same time, a hotter atmosphere can hold more moisture.

That's the real risk of a slower storm.

"If the atmosphere can hold more water vapor, then things are going to tend to rain more," Kossin said.

Kossin estimates that hurricanes have already slowed down enough that they could in theory double local rainfall and flooding. Under the right conditions, that can do far more damage than high winds or storm surge.

How Wind Turbines Could Guard The Coast Against Strong Hurricanes

With enough wind turbines, it's theoretically possible to suck the energy out of encroaching hurricanes — and use the power ourselves.

"Probably the amount of rainfall, in terms of mortality risk, is probably the most dangerous thing associated with the slowing," Kossin said. "You start to get a lot of freshwater flooding, and then you get compound problems like mudslides."

The unusually slow-moving Hurricane Harvey was a recent example. Some places in Houston got roughly a foot of rain per day as the storm crawled ashore. NOAA researchers say the flooding was the main cause of 68 deaths and $125 billion in damage.

But Kossin can't say whether Harvey's rains are a model for the future. Other researchers would need to simulate slower hurricanes to see if his observations are part of a long-term trend.

In the meantime, he wants to look at the rainfall numbers to start measuring whether today's slower storms have in fact been dumping more water.